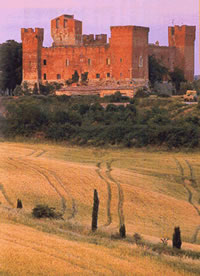 The territory of Crete Senesi contains all of those things which we have come to associate with Tuscany: a landscape of gently undulating hills, lined with cypress trees and covered by a patchwork of fields, olive groves and vineyards; a place where to find tiny rural villages, fascinating hill top towns, and great art cities.

Medieval masterpieces
Siena conserves an incredible quantity of historic buildings and artistic treasures. The stunning Cathedral and Santa Maria della Scala survey the city from on high.
In the city's museums, masterpieces by artists such as Simone Martini, Jacopo della Quercia, Duccio da Buoninsegna and Pinturicchio can be admired.

Landscape painting in Tuscany
The Crete Senesi commence just beyond the gates of the city, extending over some five hundred square kilometers of countryside characterized by the ochre-tinged soil used by Renaissance artists to create the famous Sienna yellow.
One of the first towns to greet us on our journey southwards is that of Asciano, a town protected by a 14th century perimeter wall, within which we find the Museum of Sacred Art housing Ambrogio Lorenzetti's painting of "St Michael slaying the dragon".

Revolutionary houses of worship
Rows of cypress trees shelter the nearby Abbey of Monte Oliveto Maggiore: a Benedictine monastic complex which, with its beautiful frescoed cloisters, pays homage to the artistic revolution of the Italian Renaissance.
Travelling onwards through the Ombrone Valley, we make a detour so as to visit the Abbey of San Galgano. The neighboring Chapel of San Galgano contains a number of important frescoes by Lorenzetti.

Typical products : Wine and cheese
A seemingly infinite procession of grapevines accompanies us along the road leading to Montalcino. This Medieval hilltop town is famous for the production of one of the world's most highly prized wines: the Brunello of Montalcino. Whilst in the vicinity of Montalcino, it is well worth making the short detour to see the superb Romanesque abbey of S.Antimo.

Continuing our journey through the Tuscan hillside, in no time at all we reach Pienza, a town famous for both its pecorino cheese and amazing renaissance architecture. Pienza was built following the request of Pope Pio II (Silvio Enea Piccolomini) and designed by the architect Bernardo Rossellino. From the attractive streets of Via dell'Amore and Via del Bacio, a magnificent view encompassing the whole of the Orcia valley can be admired.

Bagno Vignoni : an ancient spa
Beyond the valley lies Bagno Vignoni, a tiny spa town known since ancient times for the beneficial properties of its thermal waters. A large bath, filled by a constant flow of warm spring water, is located right in the center of Bagno Vignoni.
As we approach Mount Amiata, the hills of the Crete Senesi give way to woods of chestnut trees and the towns of Radicofani, Santa Fiora, and Abbadia San Salvadore.
Skirting the mountain, in the direction of Bolsena, we are greeted by the unmistakable profile of Pitigliano, a town perched on a great spur of tufo rock which offers a prime example of how Tuscany's medieval settlements were transformed by the innovative spirit of the renaissance 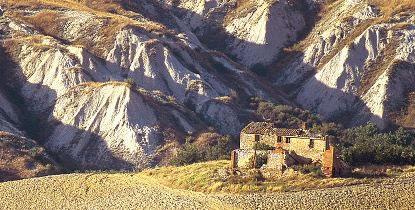