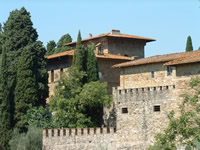 VILLA PEYRON AL BOSCO DI FONTELUCENTE
on the ruins from Etruscan age. The garden, a wide park born for delight of the owner Paolo Peyron, is articulated on three gently sloping Terraces towards Florence and designed by hedges of boxwood, powerful covered cypresses and from pause areas, statues, the fountains and gazebos that they render it a fascinating romantic oasis.
www.bardinipeyron.it

VILLA I TATTI
The Villa was acquired from Bernard Berenson in 1907, villa and garden was transforms by G. Scott and C. Pinsent succeeding to fuse the classic garden with surrounding hills. 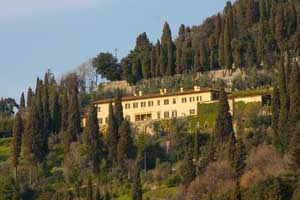 VILLA LE BALZE
The villa was constructed in first of the 1900's by Cecil Pinsent together with Geoffrey Scott for Charles A. Strong, a rich passionate American of philosophy. Because of the very steep form of the land, Called precisely Le Balze “The Cliffs” of Macciò, Pinsent Organized the space by creating long prospective axes in a succession of "rooms". Le Balze “The Cliffs” are rich of decorations as mosaics, stalactite, stucco work and work in tuff.
www.villalebalze.org

VILLA IL RIPOSO DEI VESCOVI
The villa, risen on a pre-existing farmhouse, was transformed in gentlemanlike residence in the XIX century. It is narrated that the Bishops stayed there during their climbs to Fiesole. In 1926 it became the dwelling of Dutch artist W.O.J. Nieuwenkamp that restored radically all the villa and adorned the great park with fountains and other ornaments. 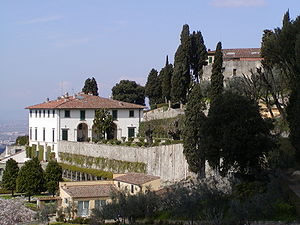 VILLA MEDICI o Palagio
The Villa was planned in1458 by Michelozzo for Giovanni dè Medici. Here Lorenzo the Magnificent passed pleasant periods in the company of poets and writers belonging to the Neoplatonica academy. The garden has been restored in first of the 1900's in fifteenth century style from G. Scott and C. Pinsent.

VILLA DI MAIANO
The Villa of Maiano Has the special character and picturesque of the villa of Tuscany countryside of the 1400. Past owner from to owner - from the Alessandri to Sforza, following the family of Pazzi and Tolomei, in 1850 it was acquired by Jhon Temple Leader who restructured the entire building bringing neo-gothic elements.