The Museum Giovanni Fattori Livorno is distributed on three floors of the beautiful Villa Mimbelli hundred and thirty six and includes works by painters who caratteliigato Italian art between 800 and 900. 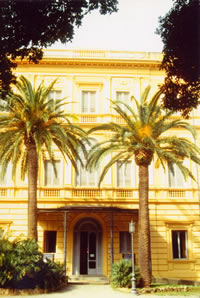 Fattori was born in modest circumstances in Livorno. His early education was rudimentary and his family initially planned for him to study for a qualification in commerce, but his skill in drawing persuaded them to apprentice him in 1845 to a local painter, Giuseppe Baldini. The following year he moved to Firenze where he studied under Giuseppe Bezzuoli.

Fattori's development to maturity as a painter was unusually slow. Few examples of his early work survive; those that do are mainly portraits and sketches, as well as a few historical scenes influenced by Bezzuoli — often scenes from Medieval or Renaissance history. In the early 1850s Fattori began frequenting the Caffè Michelangiolo on via Larga, a popular gathering place for artists who carried on lively discussions of art and politics. Several of these artists would discover the work of the painters of the Barbizon school while visiting Paris for the Exposition of 1855, and would bring back to Italy an enthusiasm for the then-novel practice of painting outdoors, directly from nature. In 1859 Fattori met Roman landscape painter Giovanni Costa, whose example influenced him to join his colleagues in taking up painting en plein air, thus marking a turning point in Fattori's development.

The group of painters to which Fattori belonged became known as the Macchiaioli. Their methods and aims are somewhat similar to those of the Impressionists, and, like their French counterparts, they were criticized for their paintings' lack of conventional finish. The Macchiaioli did not go as far as the Impressionists did in dissolving form in light, however, and when Fattori visited Paris in 1875 he reacted unenthusiastically to Impressionist works, expressing a preference for the artists of the Barbizon school. 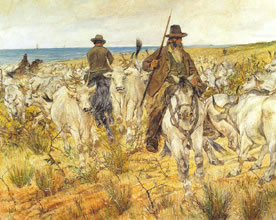 Military subjects dominate Fattori's output, although he also painted portraits, landscapes, and horses. His painted sketches made outdoors are typically painted on small wood panels; these were used as reference material in painting larger compositions, such as his Branding of the Colts in the Maremma (1887). He produced a significant number of etchings as well.

Fattori was known for his honesty and candor. From 1869 he taught at the Florentine Academy, work which provided a modest income. One of his late students was Amedeo Modigliani.