The Fucecchio Marshes cover an area of about 1,800 hectares, divided between the Provinces of Pistoia and Florence. 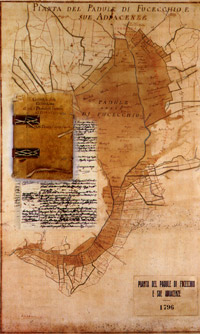 Habitat
The Fucecchio Marshes cover an area of about 1,800 hectares, divided between the Provinces of Pistoia and Florence. In spite of it being drastically reduced with respect to the ancient lake-marshes which once covered most of the southern Valdinievole, today it is still the largest inland marsh in Italy. The most naturalistically interesting area is situated mainly in the Communes of Larciano, Ponte Buggianese and Fucecchio. From the geographic point of view, the Marshes are a more or less triangular basin lying in the Valdinievole, south of the Pistoiese Apennines, between Montalbano and the Cerbaie Hills. The main water supply comes from the water courses of the pre-Apennine slopes. The only emissary from the Marshes, the Usciana Canal, runs more or less parallel to the River Arno for 18 kilometres and flows into it near Montecalvoli (Pisa). The value of this area is increased by its contiguity with other areas of great environmental value: Montalbano, the Cerbaie Hills and the little Sibolla Lake which is joined to the Marshes via the Sibolla Trench. The Natural Reserve "Padule di Fucecchio" is equipped with structures for visits, including an observatory, converted from one of the characteristics Marsh cabins.

History and traditions
As weIl as the richness of its landscape and nature, the Marshes have maintained the fascination of the historical events related to the great Medici and Lorena families. Here still remain important testimonies of the work of man, which over the centuries have shaped and changed the very structure of the wetland: the canals and port systems, signs of ancient and important waterways; the Medicean Bridge at Cappiano, the centre for controlling the water regime and fishing activities, as well as an important stop along the Via Francigena; the Capannone Farm complex, which was one of the main berthings of the Valdinievole; the buildings of industrial archaeology like the tobacco dryhouses.

The commemorative plaques so often found on the cabins or along the banks tell a more recent story: the tragedy of the barbaric massacre committed by the Germans on 23rd August, 1944.
A few skilful craftsmen still carry on residual activities related to the marsh grasses in the marshes: gathering and weaving "sarello" (tufted sedge) and "sala" reed-mace (False bulrush) (to wicker seats and cover wine flasks), "Gaggia" (False Indigo) and other typical wetland plants. 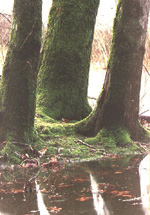 Flora
Situated on the boundary between the Mediterranean and Continental climates of the Peninsular, the Marshes simultaneously shelter plants adapted to different climates; for example in the Ramone Marshlet, on the edges of the Chiusi Woods, still survive the Frogbit (Hydrocharis morsus-ranae) and the Royal Fern (Osmunda regalis), both plants from a warm wet climate, alongside certain mosses (Sphagnum sp.), more adapted to cold climates of the north and which descended as far as the Marshes during the last Ice Age. Only in the Marshlet, and in a few other areas of the Marsh basin, can still be found fair extensions of the Tufted Sedge (Carex elata), locally called "sarello"; this plant of northern origin develops in bushy formations of more than one individual.
Where the immense reed thickets leave space to the free waters, are the "laminas" formed of plants with floating leaves (e.g. the large White and Yellow Water-lilies) which offer one of the last refuges for several highly specialised species: the Southern Bladderwort (Utricularia australis), a floating carnivorous plant, the Fringed Water-lily (Nymphoides peltata), with its beautiful yellow flowers, and the strange, tiny floating fern Salvinia natans, now extremely rare in Tuscany. 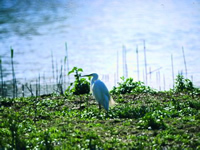 Fauna
The Marshes play a fundamental role in the migratory route between the Tyrhennian coast and hinterland; over 190 species of birds can be seen during the year, at least 70 of which nest here. Of particular naturalistic importance are the herons, which in the breeding season form the most important heronry (a nesting colony) in central-southern Italy. It is important both for the number of nesting pairs (up to 800) and the contemporary presence of 4 different species: the Night Heron, Little Egret, Squacco Heron and Cattle Egret. In 1999 the extremely rare Glossy Ibis nested in the Marshes for the first time.
Mammals include the Harvest Mouse (Micromys minutus), the smallest European rodent, which finds it official southern limit in the Fucecchio Marshes. The microfauna is just as rich and important, although perhaps less studied. A recent research carried out by Prof. Arnaldo Bordoni revealed over 1,000 species of Coleoptera: many of these, of Euro-Siberian origin, assume the status of microthermic relicts, similar to the above mentioned floral entities. 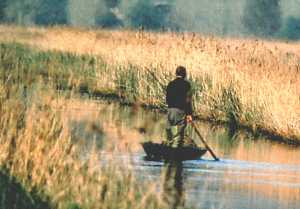 Promotional activities
The Centro di Ricerca, Documentazione e Promozione del Padule di Fucecchio (Centre for Research, Documentation and Promotion of Fucecchio Marshes), the Associazione Onlus (Onlus Association) promotes the conservation and improvement of the Fucecchio Marshes, Lake Sibolla and other habitats in northern Tuscany. The association avails itself of a technical-scientific committee and a group of collaborators and educational operators, who are qualified or experts in natural and biological sciences or in the history of the area. The Centre lends particular importance to educational and promotional activities aimed at all age groups. It manages a Laboratory for Environmental Education, organises guided tours for schools and adult groups, permanent education and refresher courses for teachers. It organises the fruition of the Nature Reserve both for educational purposes and tourism and carries out research and monitoring of habitat quality in the area. There are several publications of the Centre, including the photographic book "Gli ultimi rifugi - Vita nel Padule di Fucecchio e nel Laghetto di Sibolla" (The last Refuges - Life in the Fucecchio Marshes and Lake Sibolla) and the guide-book "Il Padule di Fucecchio e il Laghetto di Sibolla - Natura e Storia", (The Fucecchio Marshes and Lake Sibolla - Nature and history) both published by Editori dell’Acero. 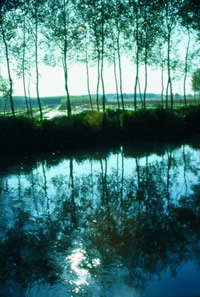 The Protected Area
About 230 hectares of the Marshes are protected as a Nature Reserve, recently established by the Provincial Administration of Pistoia (206 hectares) and Florence (25 hectares), whilst the remainder of the marshland basin lies in the bordering areas. The Province of Pistoia, whilst maintaining direct management of the protected area, has appointed the Centro di Ricerca, Documentazione e Promozione del Padule di Fucecchio (the Centre for Research, Documentation and Promotion of the Fucecchio Marshes) responsible for the fruition, use and technical-scientific supervision of the area, and the Consorzio di Bonifica del Padule di Fucecchio (Consortium for Reclamation of the Fucecchio Marshes) for environmental maintenance.
Active management in the Reserve includes the control of infesting plants, habitat recovery of the open water areas and maintenance works to increase its fruition. The rules of the Nature Reserve forbid, among other things; shooting and fishing, reclamation, morphological changes, altering the water regime, introducing plants and animals, lighting fires and unauthorised aircraft flying over the area. Entry is forbidden to some of the more interior banks of the protected area, but there is always access to the "Le Morette" observation tower.