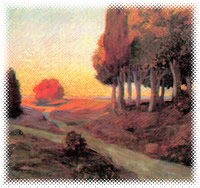 Galileo Chini - The artist
Galileo Chini’s artistic production embraces oil-painting, frescoes and decorations on terracotta.
He is the author of prestigious decorations in Montecatini, Pistoia, Florence, Arezzo, Salsomaggiore, Viareggio and Bankok. His style is grandiloquent and measured at the same time, between neo-Renaissance Symbolism, Decadentism and Art Deco. Chini, together with other artists, has given Montecatini a noble unmistakable formal style, which brings Montecatini into line with famous historical spas all over Europe and the rest of the world.

Galileo Chini – Protagonist of the world scene
Galileo Chini is one of the most important protagonists of the period between the nineteenth and twentieth century. His works are remarkable. When in 1910 he was commissioned to paint the Prah-ti-Nam, the luxurious throne room in Bankok, he was already at the top of his brilliant career. Indeed, the Siamese emperor wanted “the most famous fresco painter of the time” to carry out this work, which had to represent the most relevant events of his dynasty. 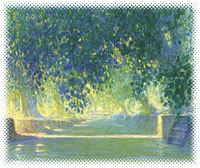 Galileo Chini – The artist’s life in Versilia
Chini bought a pine wood in Lido di Camaiore, and there, in 1915, he built the “holiday home” that he had so many times painted. He designed the furniture and only later, during the twenties, he frescoed the walls of the dining room and the drawing room with natural, marine, and oriental patterns – street-lamps, peach tree branches, herons – also reproduced in the frescoes of the Grand Hotel de Thermes in Salsomaggiore.
Today Chini’s house is a Hotel, but its atmosphere is still the same.

BIOGRAPHY
Galileo CHINI , famous italian painter and cheramist, was born in Florence on December 2nd 1873 and died on August 23 rd 1956
As his father died when he was 13, he began to work with his uncle who was a decorator and restorator.He attended evening lessons at a school of art, and in 1896, he funded "The Art of Ceramics" (later called "Factory Fornaci S.Lorenzo), a small factory where he created beautiful objects & thanks to them he introduced the Liberty style in Italy.
As a painter he took part at the"Biennale di Venezia" from 1901 till 1936. He worked, as a stage-designer,with Sem BENELLI and Giacomo PUCCINI .
This cooperation brought to the creation of the scenes for "Gianni SCHICCHI "and "TURANDOT" .
In 1911 he was in Bangkok to decorate Siam King's palace.

During the last years of his life, he lived mainly in Versilia, in Fossa Dell'Abate ( today Lido Di Camaiore ) where he had a beautiful villa (built in the Liberty style), which is now the "Club I Pini Hotel where you can still find some of his paintings and works of art. The hotel,
which is 200 mt. far from the beach, is in the centre of Lido Di Camaiore (between Viareggio and Forte dei Marmi).

You may never have heard of a Florentine called Galileo Chini, nor seen any of his works, but you have witnessed the effects of his talent all over the country. In the early part of this century, Chini was largely responsible for introducing the art nouveau style into Italy (where it is usually referred to as "Liberty"). He founded a ceramics factory that created colorful objects which soon made their way into thousands of homes, he painted canvases that were hung in museums ranging from the Uffizi to Rome's Modern Art Gallery, and he designed sets for his close friend Puccini. Chini's stage designs for Turandot are the epitome of the Liberty style; perhaps because of them he was asked to fresco the Royal Palace of the King of Siam. Chini lived in the Orient for two years. When he returned to Italy he built a vacation retreat in Versilia and called it Villa Chini. Its large sunny rooms, delightful ornamentation and century-old park were the height of luxury.