Tuscany is one of twenty regions in Italy. The region is located in the central, western part of the country, north of Rome and south of Genoa. 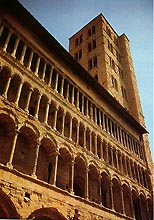 Tuscany is one of twenty regions in Italy. The region is located in the central, western part of the country, north of Rome and south of Genoa. It is bounded by the Apennine Mountains to the North and East, the Apuan Alps on the northwest and by the Tyrrhenian Sea on the West. Its land area is about 9,000 square miles (23.300 square kilometers). Its major cities are Florence, Pisa, Siena, Lucca, Arezzo, and Pistoia. Its major river is the Arno, which begins in the Apennines, and on which Florence and Pisa are located.

From the beginning...
Tuscany was the home land of the Etruscans, which was annexed by Rome in 351 BC. After the fall of the Roman empire, the region, which became known as Tuscany (Toscana in Italian) came under the rule of a succession of rulers (Herulians, Ostrogoths, etc.) and emerged as a political entity with its own rulers. By the twelfth century, the Tuscan cities were gradually gaining their independence as republics and forcing the nobility to live in the cities. By the high Middle Ages, the cities of Pisa, Siena, Arezzo, Pistoia, Lucca, and especially Florence had become wealthy because of textile manufacture, trade, banking, and agriculture. There were many wars between the city states to conquer territory and power. Gradually, Florence came to overshadow and conquer all other cities in the region. 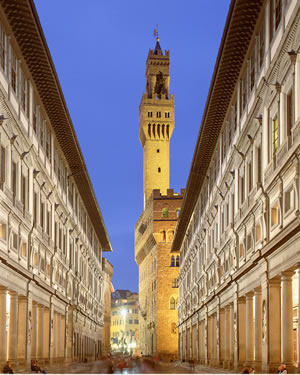 The Renaissance and Reign of the Medici
After several experiments with representative government, Florence was ruled by an oligarchy of wealthy aristocrats, among whom the Medici family became dominant in the fifteenth century. Under the patronage of these wealthy families, the arts and literature flourished as nowhere else in Europe and thus this period is known as the Renaissance, the rebirth after the Middle Ages. Florence was the city of such writers as Dante, Petrarch, and Macchiavelli, and artists and engineers such as Botticelli, Brunelleschi (who built the magnificent dome on the church of St. Mary of the Flowers, Santa Maria dei Fiori), Alberti, Leonardo Da Vinci, and Michelangelo. Because of its dominance in literature, the Florentine language became the literary language of the Italian region and is the language of Italy today. Lorenzo de' Medici, who ruled Florence in the late fifteenth century was perhaps the greatest patron of the arts in the history of the West.

Decline and Renewal
Times changed and upon the death of Lorenzo, the Medici power seems to fall apart. The Dominican friar Girolamo Savonarola ruled Florence when the Medici were exiled. After Savonarola turned against the pope, he was excommunicated and in 1498, tortured and burned in Piazza della Signoria. With the shift of commerce away from the Mediterranean and toward the Atlantic taking place after 1492, the economy of Tuscany went into a slow decline. By 1530, the Holy Roman Emperor Charles V conquered Florence and re-established the Medici family in power. They were now dukes of Florence, and within a few decades, Cosimo de' Medici was made Grand Duke of Tuscany.

Cosimo aggressively pursued a policy of economic revival, building the great harbor at Livorno because the harbor of Pisa had silted up, founding universities, sponsoring the work of another famous Tuscan, Galileo Galilei, promoting the exploratory voyages of Amerigo Vespucci. Their successors began the decline of the Medici; in 1737, the last male member of the dynasty, Gian Gastone, died without an heir. Fortunately for the future of Florence, his sister Anna Maria Luisa bequeathed the entire Medici estate and art treasures to the city so that they could be forever enjoyed by Florentines and the world.

Modern times
After the Medici, Tuscany was ruled by the Austrian Dukes of Lorraine. In the seventeenth century, Florence and Tuscany had increasingly faded into relative obscurity and did not revive until the nineteenth century. The Dukes of Lorraine modernized the local administration, reorganized religious houses and enacted agricultural improvements, most notably the draining of the areas of the Maremma and Valdichiana. The march toward Italian independence, however, led to the end of the Lorraine rule in 1861 when Tuscany voted in favour of annexation to a united Italy. Florence was capital of the kingdom of Italy from 1865 to 1871.

Today, Tuscany is a major cultural center, with museums, galleries and churches full of great sculptures, paintings and frescoes and magnificent monuments built by the greatest masters of all time. Tuscany attracts millions of tourists each year. If you are interested in visiting Tuscany, we hope our guide will be useful in planning your visit and in learning more about Tuscany in general.