Go to Lunigiana and experience a world, a journey back in time. 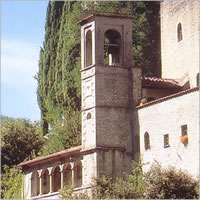 Go to Lunigiana and experience a world, a journey back in time
Like a fable, a hidden mechanism opens a secret door and you arrive in a landscape suspended in the past, there for those who want to feel its charm. Wherever you look you learn. Seize the moments of history that this lunar valley has left for visitors to inherit. And this land, green with chestnut and beech trees and scoured by clear waters, has seen many a traveller. This has always been its destiny, it is a passageway and a border, and thus a land to defend. So thought the Romans, the founders of Luni, and so believed those later, who secured a route to the sea through the Via Francigena.
This is why there are castles, fortresses and fortified villages defining these horizons.
Several still remain, but in feudal times, when enemies were everywhere to be seen and the small feuds fought for supremacy, there were around one hundred and sixty.
The ones remaining bear witness to these bygone times for those who wish to listen.
Their voices are ever fascinating for those used to hearing the whispers of noble and secret cities.
Their thousand-year-old stories still leave you spellbound.
Just think of the mystery surrounding the prehistoric stele statues and you will shiver at the sight of these sculpted and stylised stone idols.
Divinities or chiefs, symbols or armed warriors with their ornate and prosperous women.
This mystery is still open, the enigma still to be solved.
Once upon a time this was a land of thoroughfare and hence of communication and welcome for travellers and so it is today for visitors.
Its hospitable and singular inhabitants, who feel neither Tuscan, Ligurian nor Emilian, have created a basic, balanced and tasty cuisine.
You will discover testaroli and panigacci, olive oil honey and wines such as the famous Candia, another pleasant way to get to know this enchanting valley. 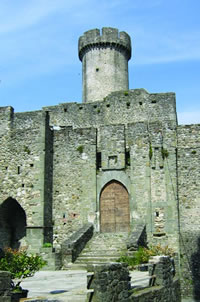 Malgrate Castle, with its characteristics round tower, has dominated the valley of the River Bagnone for centuries.
It also controlled the important communication routes from the Apennines, Cisa and Garfagnana.
The fortifications were erected in the 14th century (although the origins are probably older) and from then to the 17th century, the standard of the Marchesi Malaspina flew on the tower. The tower is 25 metres high and has a cantilevered rampart walk with brackets.
As well as its defensive functions, the castle was used as a seigneurial residence in 1641, when the central body of the complex was transformed into a palazzo around the tower.
Despite this, Malgrate still appears as a classic medieval fortress: the main body consists of a keep, with the tower, situated on the shorter side of the feudal palazzo with a rectangular layout.
The complex is surrounded by a trapezoidal wall, with Guelph battlements and scarps, loopholes, angular turrets, and a rampart walk, which probably dates back to the 14th century.
In the west wall there is a gate that leads to the old town. The two main roads start here, with elegant palazzos along the way.
The inner front of the castle has a door with a raised arch and you can still see the traces of the old drawbridge, today replaced by one made of stone and those of another postern.

The Brunella Fortress stands in a strategic position on a hill over the town of Aulla, where the rivers Magra and Aulella meet.
The date of construction is open to conjecture, as is the identity of the proprietors, despite the fact that the building corresponds to the architectural standards typical of the age of transition: the first hypothesis dates the building to the end of the 15th century and attributes the project to Jacopo Ambrogio Malaspina, who was lord of Aulla at that time, the second hypothesis claims the fortress was built by Giovanni dalle Bande Nere, who came to Aulla in the first quarter of the 16th century, and may have entrusted Antonio da Sangallo il Vecchio with the project. A third hypothesis identifies the consigner of the work as Adamo Centurione, a merchant from Genoa who became the owner of the estate of Aulla in 1543.
The layout of the building is quadrangular with large angular hip rafters around the keep. This has various environments on two levels. The whole complex is surrounded by an impressive outer wall characterized by a wide scarp and it was transformed into a residence in the early years of the last century.
After the state bought the property it was completely restructured.
It is currently the home of the Natural History Museum of Lunigiana, and it is surrounded by a natural park of notable interest. 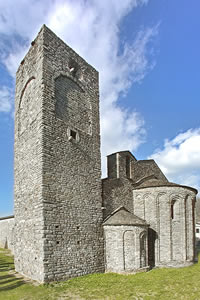 The Parish Church of Sorano, dedicated to Saint Stephen, is one of the best example of Lunigiana Romanesque Style.

During the years, we have discovered that this parish church existed in the roman age. For three centuries it was used as a farm-locanda, until it was attacked by the Goths.

In 1148 we have the first traces of the Sorano Parish Chruch. It was built with stone ashlars and pilasters and hanging small arches on the apses. Very important is the presence of a feminine stele statue, representing the ancient religiousness linked to the modern one. On a nave wall, there is a figure, with characters of popular art, typical of the Lunigiana culture.


Terme in Lunigiana
Terme di San Carlo
The Terme, well known since the times of San Carlo Borromeo, after whom the spa is named, situated a few kilometres from Massa, is recognised for its extraordinary position close to the Alpi Apuane and the Costa of Versilia. The main attractions of this place are the famous Marble Caves, the beaches along the Tirrenian coast and the numerous cultural engagements and shows organized by the spa centre for the whole season.

Equi Terme
Set in the Parco delle Apuane in the region of Massa Carrara is Equi Terme, a charming spa centre and ideal holiday place. The healty climate and the untouched beauty of the surrounding area, offer the guest total immersion in nature, sport, and art in the fomous castles of Lunigiana.