The monastery of San Vivaldo is certainly bound up with a succession of the Franciscan's Office leaving here a notable trace. 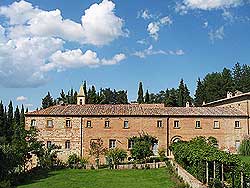 The Holy mount of San Vivaldo in Tuscany, is one of the Holy Mount common in the north of Italy - like the holy mount of Varallo Sesia in Piedmont - builted between 1500 and 1600, which origin are dated back between 1185 and 1280, when the area was possessed by the friars of Normandy Cross and disputed by Castelfiorentino and San Miniato.
When Franciscan entered the old church of Camporena, in the place there was still devotion to Vivaldo Stricchi, a Blessed hermit whom veneration start to be diffused when since he has been found - in miraculous circumstances - in the trunk of a chestnut he used as home when he was alive.
In 1325, the place where he died, was built a Chapel dedicated to Vivaldo, and than a monastry, and in 1355 a church that today is still possible to visit.
Since 1 st of may of 1500, after the establishment of a Franciscan Minor Friars settlement, they start to build a complex of chapels and churches reproducing the topography of the holy places of Jerusalem. Here the name "The Jerusalem of Tuscany".
The holy mount has been planned by the Franciscans that in that time were used to go on a pilgrimage in the Holy Land, in particular by Brother Tommaso da Firence and Brother Cherubino Conzi, that built first the monastery and then 25 chapels, helped in the task by local people in transporting stones necessary at the buildings from the river Egola to San Vivaldo.
The main purpose in building the chapels was the one to offer local people the choice to go on a pilgrimage without going to Jerusalem - that in this period was subjected by Turkish rule - and without an excessive expenses. In fact, there is a document of Pope Leone X (from the Medici's family) the acknowledgment of the Chapels as religious place and the granting of and indulgence to those who went there to pray.

The Franciscan Monastery
The monastery of San Vivaldo is certainly bound up with a succession of the Franciscan's Office leaving here a notable trace. During centuries the monastery has been enlarged to became the awesome building that today is still possible to admire.

The Church of San Vivaldo
The Church of San Vivaldo is located where once there was the chestnut tree where the 1 st of may of 1320 Vivaldo Stricchi was founded died, and that today it correspond at the chapel where is the Holy urn with his reliquary.
Today, what we can still admire the result of an enlargement of the original church, made between 1326 and 1355 and consecrated the 30 November 1416 (or 1410) by the Franciscan Bishop Fra' Antonio da Prato. 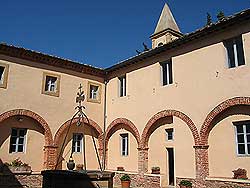 The exhibition is divided into 4 sections: "Life and tradition of the heremit Vivaldo", "rother tommaso from Florence and the Jerusalem of Tuscany", "an Vivaldo and Jerusalem" and "San Vivaldo, Varallo and the Franciscan tradition of Holy Mounts".