Mugello is only few kilometres from Florence and we can find traces of history worthy of a great European capital. 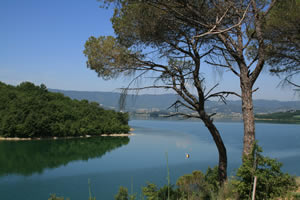 A few kilometres from Florence, in the Mugello, we can find traces of history worthy of a great European capital. Along the river Sieve centres of ancient origins and complex foundation rise at close distances. Important Etruscan areas became a place of settlements and villages in Roman times. The Mediaeval Lordships - the Guidi and the Ubaldini- were soon in competition with the Commune of Florence which was expanding and in search of "new lands".
Starting in 1300 this area went through a renewed period of a remarkable development thanks to the particular strategic and economic value that the Mugello Basin held for Florence. The Medici family, which originally came from this area, and the Lorenesi family made it their pride and joy by investing financial resources to strengthen their presence around Florence.
Important buildings and fortresses, castles, villas and palaces remain to testify the development of the Mugello.
Moreover, even the cultural and artistic history of Florence finds elements of primacy importance for its development in this area.
Artists like Giotto and Beato Angelico were born here, famous architects worked at the construction of the towns of the "walled lands", the features in the landscape of many Florentine paintings have found their inspiration here. 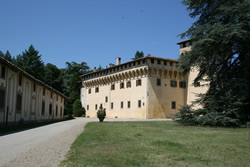 Territory
A few kilometres from Florence, among the rolling hills, the tall cypress trees, and against the background of mountain peaks and passes, stretches the territory of the Mugello. Silent waters, a delightful countryside friendly, peaceful and hard-working people, healthy food, the places of the Medici, the historical villas, all to be found just outside Florence.History, culture, high quality service in a renewed relation with nature these are the things the Mugello has to offer. Access by bus and by car to the various localities in the area is excellent. From the A1 motorway, there is the exit at Barberino di Mugello. There are several interesting secondary roads too.The fascinating old "Faentina" railway line takes the visitors into the Mugello area from the Romagna region departing from Faenza or from Tuscany departing from Florence. Local public transport is available for travelling in the localities. 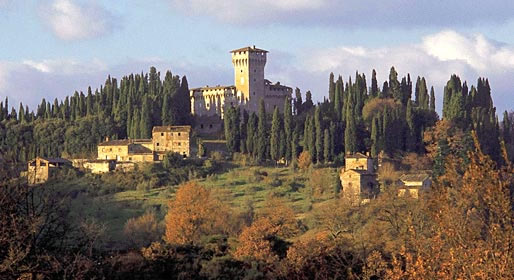 Environment and climate
The territory of the Comunità Montana unites two geographic areas: the Mugello and the Upper Mugello or Romagna-Tuscany.
The valley in the Mugello is a reference point to the Upper-Middle part of the catchment basin of the river Sieve: it is a wide bowl confined by the main watershed of the Apennines (from Mount Citerna to Giogo di Villore) in the North, by the spurs of Mount Giovi and Mount Senario in the South.
It is closed in the west by the Mounts Calvana beyond which the province of Prato spreads. In this area we find Vaglia, San Piero a Sieve, Barberino di Mugello, Scarperia, Borgo San Lorenzo and Vicchio. The Mugello landscape is a complex: from the thick woodlands of the ridges where boars, roe-deer and foxes reign up to the areas of chestnut woods and olive groves, from the vast flat land of old terraces confined by slopes cultivated with wheat and sun flowers, up to the fertile valley bottom where the main inhabited centres and roads of communication are situated.

To the North, among the mountain ridges of the Mugello and the passes which descend towards Bologna and the Romagna, in the upper part of the basins of the rivers Santerno, Senio and Lamone there is the Upper Mugello with Firenzuola, Palazzuolo sul Senio and Marradi which are its most important towns.
The big rocks and the peaks, although they are just over 1000 metres high, create massive outlines and scenes, at times very impressing. The landscape is dominated by uncontaminated beech, chestnut and oak tree woods, by vast meadows at times interrupted by juniper bushes or by the outcrop of stones. The limpid water and vigorous vegetation of these valleys are the right habitat for a great variety of birds and fish.
The climate is a transition between the severe one of the Padana Plain where the cold winds blow freely coming down the Alps and the milder Mediterranean ones, typical of Central Italy.
The Mugello basin, just below the higher passes of the mountain chain is often a meeting point of cold North winds and humid warm South-West, West, and South-East winds: this is the cause of fog in Winter and the hot-damp weather in Summer.

Art and Faith
In the Mugello the historical-religious property represents a fundamental part of the cultural possessions: the visitor may find parishes, abbeys, convents and oratories all over the territory.
Going along narrow country roads we can come to ancient Romanesque parishes preceded by a row of cypress trees.
Bell towers of suggestive churches and abbeys overlook the village historical centres. On mountain summits we can find secluded and austere monasteries.
These unknown architectural jewels often enclose works of art of great value: entering on tip-toe, if possible a little before or after the services which is often the only moment the religious building is open, will allow you to meet and get acquainted with the real cultural identity and their origin.

Itineraries in Mugello
The Mugello, the Florentine Mountain offer the visitor several possibilities of enjoying the environment and their incredible resources:

Medicean places
The Mugello territory was very much loved by the Medici family, whose roots seem to lie in Campiano, a hamlet in the Municipality of Barberino di Mugello.
The Medici family has left Mugello with numerous traces of a power that united economic and political expansion to the most innovative forms of artistic expression. They are not merely the result of an enlightened patronage but part of a cultural context so accepted and widespread that they are also clearly visible in the geometrical division of the lands and the woods, in the rational canalisation of the waters, in the design and size of certain farm houses, manors and churches, and in the harmonious distribution of the settlements.
It is a finely woven mesh that finds no interruption in continuity, and goes from its highest most specialized moments (like one of Donatello's or Michelozzo's works) to the more common ones, which pertain to everyone, and create “atmosphere”.
The traveller is, therefore, invited to enter this world by whatever means he chooses, and to travel along the roads, now byways, that were visited by ancient times and travellers, to discover the monuments and outstanding artistic works, but also the lesser and often unacknowledged signs of this great civilization. 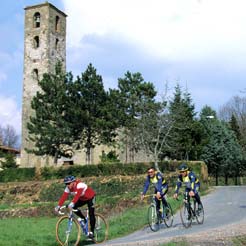 Itineraries by bike
Cycling among chestnut trees and vines
The Mugello is crossed by a network of roads and lanes which are nearly always asphalted and with little traffic and which run along a road system laid out through the centuries. The seven itineraries proposed in the new publication of "Cycling amidst chestnut woods and vines"give the cyclist the opportunity to test himself on the mountain tracks to relax in the valley along the Sieve River, to face the up ward slopes that surround the hills. The landscape which surrounds the itineraries is always charming and varied: from cultivated plains to vines and olive groves on the hills, from thick beech forest to the majestic chestnut tree woods.
The guide book allows the cyclist to make excursions with various difficulties discovering everytime different and evocative historical and artistic surroundings.

The Mugello is easily reached either by car from the A1 motorway and from the local road network, or by train on the old and fascinating tracks of the Faentina Railway (the bicycle can be carried on the train) or by bus. The access to the territory also favours short period or out of season transfers: advisable are spring or autumn seasons linking the excursion to a visit of folk or gastronomic festivals. 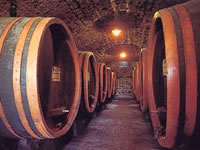 The Routes of the Rufina and Pomino Chianti wines
Immediately to the east of Florence there is an enchanted territory.
This is the reign of two wines which have been famous for centuries.
The Chianti Rufina D.O.C.G. and the Pomino D.O.C., each with its own personality and characteristics.
On these hills which lean out towards the Apennines, the great Tuscan civilization is exalted in a landscape studded by towers, manors and Romanic Churches. Here Giotto lived his artistic adolescence; here the great Florentine families built their villas and castles; here the Tuscan Christianity had some among its more important places of worship.
In this landscape still to discover the road of the Rufina and Pomino Chianti Wines was born. Through a visit to the cellars, the road proposes a route to discover the many beauties of the teritory and the five towns that surround it: Pontassieve, Pelago, Rufina, Londa and Dicomano.
The wine which is the main product of this angle in Tuscany can be the ideal companion for a trip which reveals unexpected visions of land and sky. Vines surrounded by thick woods; olive and cypress trees which follow the sweet bends of the hills; towers and stone bell towers which seem to caress the sky. Art and nature, wine and food, sports and fun: all this and much more is waiting for you on the road of the Rufina and Pomino Chianti Wines. 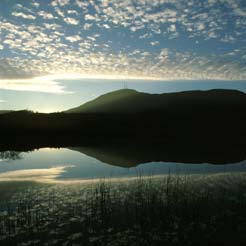 Nature
The Mugello land, which has lived for centuries in the shade of Florence is to be found astride the watershed of the Apennines.
It is a Tuscan land, rich of history and artistic evidence and above all it is a land of different surroundings from the rugged beauty of the valleys of the Upper Mugello or Tuscany Romagna - rugged and little populated - to the sweet lines of the open basin dotted by the Mugello villages.
It is an Apennine land, beautiful and deep, with ridges covered by a great number of beech, chestnut and oak woods; semi-innate valleys cultivated as a harmonious patchwork, crossed by the Sieve river, which seems to take life from the big artificial Bilancino lake.
The Medici family who was native of this land had palaces, castles and convents built here. In the villa of Cafaggiolo, Lorenzo Magnifico escaped from the "res pubblica" to take refuge in the tranquillity of the fields. He heard the call of nature and of the land and here he played, celebrated and rediscovered the joy, beauty and life.