In Tuscany old steam engine trains are still in function and aim combining the discover of history with the discovery of the region and its beautiful landscapes. 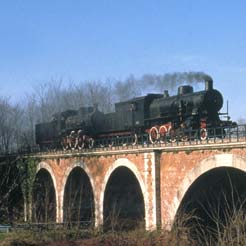 In Tuscany old steam engine trains are still in function and aim combining the discover of history with the discovery of the region and its beautiful landscapes. It also aim to offer the opportunity of traveling slow following the principles of sustainable tourism.

Traveling on a slow steam engine train takes you back in time, when travel was still an adventure. It gives the opportunity to slowly find hidden places and taste their true essence. Visiting Tuscany by steam train is an endless discovery of this beautiful Italian region that has so much to offer.
An appealing region in Tuscany, not so well-know, is Mugello that stretches in the northern province of Florence. There many towns, villages and places worth to be visited. The Mugello steam engine train departs from Santa Maria Novella train Station in Florence and arrives in Borgo San Lorenzo. It stops in small and characteristic train stations such as Fiesole-Caldine, Montorsoli, Cercina and Fontebuona, just to name a few. The locomotive takes about one hour and half to make the itinerary giving the opportunity to admire the beautiful landscapes in Mugello.
The steam engine train in Mugello runs on special occasion, such as festivals and other events. Every fall the locomotive runs in occasion of the Marradi Chestnust Festival in October.
Another fascinating steam engine train in Tuscany is Trenonatura that runs through beautiful Siena landscapes. The old locomotive goes steaming across green, yellow and red colors that characterize these beautiful area. The train is scheduled all year long and has many different thematic itineraries in Valdorcia as well as in other destinations in Tuscany.
Old steam engine trains are certainly a great transportation to discover Tuscany by traveling slowly appreciating the hidden beauties of this region in Italy.

STEAM ENGINE IN TUSCANY
MUGELLO : From Toscana to Romagna
The most picturesque stretch in steady ascent (at some points at 26‰) for the Faentina starts from Borgo San Lorenzo.
Leaving the station, the train plunges into an open landscape among fields of wheat, soya beans and sunflowers. The scene becomes more and more suggestive: old vine-yards and olive groves, thousand year-old parish churches, ancient farmhouses, and geometrical shaped vegetable gardens accompany the traveller as far as Ronta station, the last centre of the valley before facing the Apennines.
The two “Faentine”, the main road and the railway, now separate; the first will face the Passo della Colla di Casaglia, the railway enters into the heart of the mountain in a succession almost continuous tunnels and rail bridges. During the short moments out of the tunnels, the traveller can catch a glimpse of an isolated and wild territory, among chestnut woods first and beechtree woods after. The traveller can see paths and old mule-tracks, old ruins and numerous railwaymen’s cottages along the line.
A short while after the stop at Fornello, where there are neither houses nor roads, the track enters the great Apennines or Allocchi tunnel which at mid-way (about 1800metres) reaches the height of the Pass which is at 578.38 metres above sea level. Then the descent towards Romagna starts and the traveller will then meet the stations of Crespino sul Lamone and Marradi which is the town of the poet Dino Campana.
After passing the big station with a vast service area and about ten railway tracks, the line starts descending towards the Romagna plain. The view is excellent; villas, medieval castles and the landscape which from mountaneous becomes hilly with orchards of peach trees and cherry trees which become clouds of flowers in the springtime. The train then reaches the well-known medieval city Brisighella and after ten kilometers it ends its route at Faenza, rejoining to the Adriatic line Bologna-Ancona.
In 1921 the section Faenza-Russi was inaugurated and since then it is possible (in some cases without changing train) to reach the magnificient city of Ravenna, the following station in Classe and all the Adriatic Riviera.