The original nucleus of the monastic complex Cistercian of Saint Galgano is constituted by the hermitage of Montesiepi, built in Roman style as mausoleum of the Saint between the 1182 and the 1185. 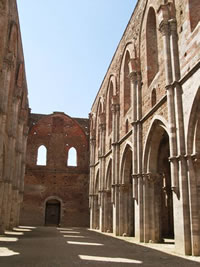 The original nucleus of the monastic complex Cistercian of Saint Galgano (Galgano Guidotti 1148-1181) is constituted by the hermitage of Montesiepi, built in Roman style as mausoleum of the Saint between the 1182 and the 1185. Its greater particularity is the so-called 'the Rotunda of Saint Galgano' with a unique, for the constructions of that time, plan. It encloses, beyond to the tomb of the saint, the famous rock with the sword. Although at a first look it can seem an emulation of ancient Etruscan tombs of Populonia, Vetulonia and Volterra, the architect responsible of its construction inspired itself to Castel S.Angelo and the Pantheon of Rome. In the following centuries the Rotunda was strongly manumitted, but the perfect restoration of the year 1924 brought it back to the original aspect. The dome is constructed using alternated rows of white stone and bricks. With the growth of the interest in the cult of Saint Galgano many rich nobles wanted to contribute to the embellishment of the Rotunda, in the year 1340 was begun the construction of a Chapel on the north side, then frescoed by the great artist Ambrogio Lorenzetti, he's paintings are still today in part visible thanks to a careful restoration work that has arrested their degrade.
The hermitage began too small to contain the monks and the pilgrims, so in 1218 was decided to begin the construction of a new imposing Abbey in the plain below. The works were encouraged also by the Bishop of Volterra. The community of Saint Galgano began the point of reference for all the territory and for the interest of the Senese Republic. The Abbey was built in the classic gothic forms of all the other Cistercian constructions, with plan at Latin cross with three aisles, rich of carved capitals and rose-windows, cloister, halls, bell tower.
The richness of San Galgano and the good relationships with Siena attracted on it the incursions of the Florentine armies that, together with other political events, carried to a rapid decadence of the abbey since from the first half of 15th century: in the 1550 only five monks were in the abbey and at the beginning of 17th century only one old and poor monk still lived between its walls, already in ruin. On the 6 of January 1786 the bell tower, with its 36 meters high, collapsed sweeping up great part of the roof of the church.
In the 1789 the great Abbey was definitively abandoned and become an enormous quarry of stones and columns for all the buildings of the zone. Fortunately, from the beginning of this century, many jobs of restoration and maintenance have been undertaken, so that today the ruins of Saint Galgano, by now without more traces of the roof, are one of the most visited medieval monuments in Tuscany. 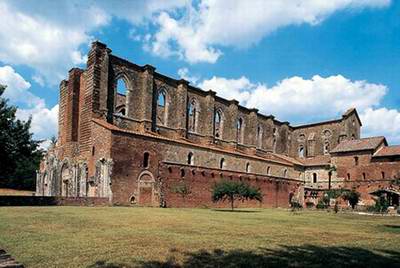