However the abbey of Sant'Antimo existed in the year 814 as it testifies a diploma of Ludovico the Pious one that enriches the abbey of gifts and privileges.

The tradition, enough reliable, wants that Charles Magno in 781, of return from Rome along the street Francigena, transited for the Amiata mountain with his court and his army. In many were struck by the plague and, to stop the scourge, the emperor made a vow and founded the abbey. Sant'Antimo is therefore an Ex imperial vote. According to other historians the foundation goes up again to the Longobardis as that of St. Savior on the Amiata. It is not even excluded that in the place a Roman villa existed and is known with certainty that in the IV-V century Castelnuovo of the abbot was an important lived center, endowed with a parish, then disappearance.
However the monastery of Sant'Antimo existed in the year 814 as it testifies a diploma of Ludovico the Pious one that enriches the abbey of gifts and privileges. From the X century the abbot of the monastery is also Count Palatino, public position of great relief conferred by the emperor. In the IX century the abbey crosses financial difficulty, to the point that in the 877 Charles the Bald one entrusts him to the bishop of Arezzo, with the obligation to maintain you to own expenses 40 monks. 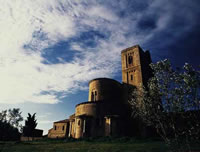 In the 992 pope Giovanni XV (985-996) a bead with which the monastery passes under the direct giusrisdizione of the Apostolic Center emanates. The 1118 saw the beginning of the apogee of Sant'Antimo. The count Bernard of the Ardengheschis surrenders his whole patrimony in good moili and immovable "in toto I reign Italic et in tota Tuscie marks" to Ildebrando, child of Rustic, so that transfers to the abbey. The testimony of this exceptional donation was engraved on the steps of the altar as lapidary paper to perennial memory of the event. The abbot Guidone (1108-1128) that it received the donation it immediately gave start to the great yard for the construction of the new church.
The period of maximum shine lasts up to the loss of Montalcino, occupied by the senesis that they force the abbey to the signature of a pact with which is also surrendered the fourth part of the territory of Montalcino in Siena. And the June 12 1212. The abbey begins its slow decline. Entrusted to the Guglelmitis by pope Nicolò IV (1288-1292) with bead of August 23 1291, a brief resumption lives in the period between 1397 and 1404, up to its suppression in 1462 from Pious pope II (1458-1464) that it entrusts the good of it to the bishop of the newborn diocese of Montalcino and Pienza, created the August 13 of the same year. After the passage of the abbey to the ownerships of the State in 1867, a long period of restaurations was opened that saved the whole building. 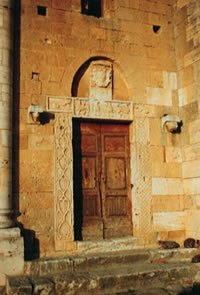 The jobs, initiated in 1872 and finished in 1895, they brought the church to the actual aspect. In 1992 religious activity is taken back thanks to the arrival of the Regular Canons Premonstratensi. Any image, any fimatos, any virtual visit is able it anchors sostiutire and to reproduce the same charm of this place. The enchantment is total and the harmony with which the geometries architettoniiches of the abbey are integrated with the landscape it overcomes every comparison. The façade, remained incompiiuta, introduces a portal, probable solution of shift to a prgetto that it foresaw two of them, surmounted by a datable lintel to the first half the XII century and capitals, friezes and ferrules of few back. The element that confers to this church a French imprint more than every other is the scheme basilicale with deambulatorio to radial chapels, only in Tuscany and among the little presents in Italy. To the morning, the sun plays with the stone that is the most precious among all those used for the church in the deambulatorio: alabaster and travertino, with which capitals and columns are realized. Long 44 meters, the church is guarded to the entry by two lions stilofori, destined probailmente to the external portal, datable to the XII century and attributed to the Teacher of Cabestany as the stupendous capital with the scenes of "Daniel in the pit of the lions."
The refined persons motives fitomorfici and geoetrici, precise in the sketch and clean in the carving, they denounce a matrix that must be sought in France in Alvernia.
However other capitals situated in the deambulatorio introduce a character lombardo which it makes the hypothesis reasonable cha to Sant'Antimo has worked two maestranzes, a Frenchwoman and one, perhaps bunting, or that has dealt with an only maestranza lombarda that had sojourned in Alvernia.

On the right of the greatest church, sets to the beginning of the deambulatorio, the chapel is found carolingia of the century VIII-IX, a small building to only rectangular aisle, with apse semicircolare. On the left external side the imposing tall bell tower is raised around 30 meters. Divided in four orders, decorated from injured of it, with openings monofore and bifore, are of style lombardo with a note pisana for the columns to the angles of the base. The bell tower has a coverage to terrace, on which it's situated two bells, one of which hands engraved abbot Ugo's name (1216-12222) and the date 1219. The apse of the great church, synthesis of power and rush, culminates with a delicious bifora, the only one that entirely illuminates.
I lend other monasteries to the monastic reform of Vallombrosa they were united in Tuscany and out, under the charismatic guide of the Gualberto forming the Congregation Vallombrosana officially recognized by the Pope Urbano II in 1090. The origins of the congregation vallombrosana is characterized by a powerful person wish of reform, both towards the church and of the monachesimo and from the desire to live to the letter the rule of St. Benedict.
The congregation knew a long period of expansion that was maintained up to the XVI century; then it began the decline and in 1866 the Italian government decreed the general suppression of the religious orders. Meanwhile, monastic community was transferred to Pescia, where it remained up to 1949. It was only in 1961 that it could reenter in the Abbey of Sant'Antimo, whose ownership has remained nevertheless to the State.

Visits of the abbey of Sant'Antimo
The entry of the church is free.
The church cannot be visited during the functions.
During the visit:
it is necessary to observe the silence.
it is necessary to dress in decent way
it is necessary to hold extinguished the jail cell.
The groups don't have to book and (particularly those juvenile), you/they can ask the help of a free monk from other appointments.
Who desires a guided visit you can turn to custodian Guido Burlando, present in church during the hours of visit. (you can eventually be booked phoning +39 3494796374).