For Impruneta the art of terracotta is both an important heritage of great value and a primary element of its cultural identity. 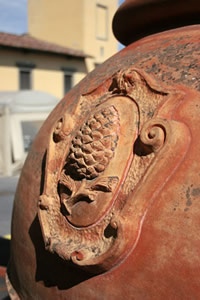 For Impruneta the art of terracotta is both an important heritage of great value and a primary element of its cultural identity. In this territory the so-called cotto-civilisation has affirmed itself and even today it plays an active and vital role.
In these last years the activity has been diversified and specialised in two ways:
· The industrial way: with the manufacturing of high quality brick pavements both for houses and buildings and with innovative and highly technological productions such as curtain walls, new materials for cladding in which clay is melted with particular resins and natural quartzes.
· The artisan way: using hand manufacturing techniques following the tradition for “orci” (pitcher), earthenware and ornamental pieces.

The success of terracotta in this area is primarily due to the presence of a particular kind of clay which guarantees positive results, the abundance of woods that once provided the combustible for the furnaces, and the favourable geographical position of the town, which is situated on the road network which links Florence, Arezzo and Siena.
A pivotal document in the history of the kiln owners is the one dated 23rd March 1308 (Florentine Style): at that time orciolai e mezzinai (potters and the makers of earthen jugs) were united in a single corporation which had the duty of protecting and regulating the production and the quality of an already thriving handicraft.
The act stipulated by the notary Benintendi di Guittone da Santa Maria Impruneta, tells us that the corporation was made of 23 members, of whom the majority, 11, came from the populi plebis Sancte Marie Impinete. Since then, the production of cotto has continued over the centuries and with the passing of time dynasties of kiln owners have been formed.
A visit to the furnaces enables us to take a close look at the phases
of the production process in which the four primary elements are combined: earth, fire, air and water. The route enables the visitor to become familiar with the sites of production and to observe the numerous cotto objects in the territory.
Together with the traditional products, new ones can be observed. These are the results of constant research, to be used by architects such as Mario Botta, Aldo Rossi and Renzo Piano in new architectural and urban landscapes all over the world. 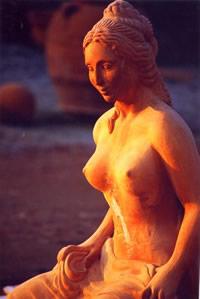 Discover the Terracotta of Impruneta
The itinerary is divided in two sections: the first one –to be covered preferably on foot- is in the centre of the town, in particular in “the brickworks neighbourhood” one of the most striking places in Impruneta.
The second section –preferably by car- will enable the visitor to discover all the different typologies of the cotto objects in the territory, along the ancient ways, in the gardens of the villas, in the farmyards and around the colonial houses.
The first section of the itinerary, organised in a circular way, starts from the Buondelmonti Square, in the centre of the town, where many cotto objects made in the brickworks in Impruneta can be admired. From the town centre, the itinerary heads towards the brickworks neighbourhood, where brickworks are still active. They are usually run by a family and they still maintain the traditional way of manufacturing such as the one called “a colombino”.
The natural site of the Interest Point will be in the historical brickworks Agresti in the very centre of the brickworks neighbourhood. Its function is to collect and to highlight all the proof and the evidence of the historic heritage including objects and instruments.
As regards the second section, the itinerary will run from the centre of the town to its outskirts, and so arriving at some production centres that are far away from the town. These centres have an industrial production and therefore produce a vast range of products, from the traditional to the avant-guarde ones. Some of those factories still retain machines that can be considered pieces of industrial archaeology (i.e. machines made in the XIX century for the automation of some production phases). These factories are situated south of Impruneta, between Ferrone and Falciani. In this area there is also a clay quarry, which is still in use and is visible from the street. This quarry, which is included in the itinerary, will enable the visitor to observe the raw material (the clay), necessary for the production process. Following this itinerary we can easily see the gardens of the villas which are decorated with orci(pitchers), vases and statues which are placed both inside the villas and on the surrounding walls. This is an ornamental tradition which is characteristic of both Impruneta and Florence, where usually protective walls and the facades of the villas are decorated with vases placed on top of the roof as well as on the sides of it.
As far as the tabernacles are concerned and more generally speaking the use of terracotta for devotional purposes, the Church of San Miniato a Quintole (where the cotto elements are above the entrance door and on the side of the arches of the portico) and the tabernacle of Sant’Isidoro, a model of bas-relief made in cotto in the XVIII century, deserve to be mentioned.
Knowledgeable of these elements the visitor, will understand the way in which cotto in Impruneta has been used in the past and is still widely used in our present days as a material both for sacred and profane purposes. Above all the visitor will come to know how cotto as brick has always been used both as a decorative and a structural material.
In our studies we have highlighted another aspect, which is the use of cotto in the old colonial houses in order to witness the use of this material in the building of said houses.
The typical uses of terracotta in the rural building trade are: the brick floor in the farmyards, the load-bearing pillars in the loggias and in the porticos, the grating in the haylofts, the antique cabin kiln and roof tiles.
Three of the colonial houses have been included in this itinerary for the characteristic quality of their structures and for the use of terracotta.
The map of the products of Impruneta cotto in Florence has been included in order to highlight the main examples of the manufacts that have witnessed the close relationship between Florence and Impruneta over the centuries. This map can be considered as a vademecum which enables the Florentine visitor to capture immediately the signs of Impruneta’s rich production.