This is the tourism of the new millennium, and Tuscany is the region of Italy with the greatest number of spas. 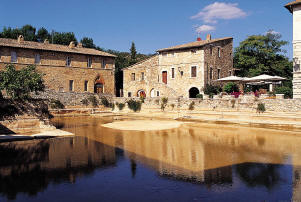 Spas in Tuscany
Feeling well. Feeling fit, in harmony with yourself. Spas of Tuscany is a full immersion, a voyage within yourself to recover your lost well-being.
This is the tourism of the new millennium, and Tuscany is the region of Italy with the greatest number of spas.
Think, for example, of the many springs with water rich in natural elements.
Think of the springs already known in the days of Emperor Augustus, or of those preferred by Matilda of Canossa, or of the first water where Saint Catherine of Siena used to bathe, or of the spas Pirandello and Verdi used to go to.
Natural resources, waters which find their way through the rocks drop by drop, and come out into the sunlight in spontaneous springs, natural swimming pools which you can dive into, in order to regenerate yourself and find a balance between body fitness and inner serenity.
Spas have now become the new temples of health in Tuscany, where the natural beauty of sites is rounded off by renovated tourist facilities, invigorating streams, caves and falls with warm water. Enchanting places where nature answers the need for health and well being. 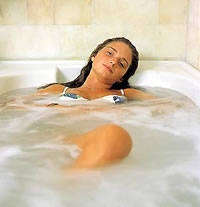 BAGNI DI LUCCA - thermal establishments
The origins of the spa town of Bagni di Lucca go back centuries and in Medieval times the town was called Bagni di Corsena. The properties of the waters of Bagni di Lucca were recognised as far back as Roman times but a parchment dated 3 April 1291 documenting the use of the thermal springs, is proof that this spa town is one of the oldest in Europe .
A sonnet by Franco Sacchetti's to Michele Guinigi highlights how highly esteemed the spa was. On a more scientific plane, Ugolino da Montecatini in his famous treatise, described the therapeutic powers of these springs, which attracted the most important people of the day.
Under the rule of Elisa Bonaparte Baciocchi, Bagni di Lucca, became one of the most famous spa towns in Europe and during the 19 th century the town, already a popular destination during the Renaissance, experienced a boom as both a healing centre and as a holiday resort; it was one of the most fashionable destinations on the Grand Tour. During the Belle Epoque and the early years of the 20 th century many illustrious people came to visit - Pascoli, Carducci, Alfieri, Montale, Dumas, Byron, Shelley, Puccini, Mascagni, to name but a few.
The thermal establishments of Bagni di Lucca comprise 19 springs of natural sulphate - bicarbonate - calcium waters which reach a temperature of 54°, in varying degrees of concentration, warmth and radioactivity.
owadays, clients of the ever-popular thermal centre can make use of two caves with natural steam and numerous springs of thermal water, used in the preparation of the many treatments and cures.Bagni di Lucca has two thermal centres: Terme Jean Varraud and Casa Bocella, both specialising in the cure of arthro-rheumatic, broncho-pneumatic,Vascular and gynaecological pathologies.
Unique are the two natural steam caves, additional to the centres, where the temperature fluctuates between 40 and 47 °C . The smaller and more charming is the Grotta Paolina, opened in 2001, which comprises two caves, each with its own spring at different temperatures.
Apart from these facilities, there is also the Centro Ouida, which uses the latest in thermal beauty treatments and targeted therapy programmes. 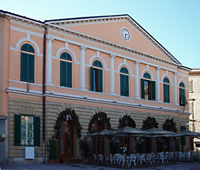 CASCIANA TERME - thermal establishments
At the spa in Casciana Terme a veritable river of precious waters comes in and out of the baths continously.
Everyday, obout 6 million litres of thermal water pass through the swimming polls, an oboundance that can reach 10 million litres.
These plentiful and continuous supply is a guarantee of safety and efficacy, to be enjoyed not only in the swimming pools, but also in the Roman bath and hydromassage baths that the center puts at its guests disposal.
The waters and the spa treatments have few contraindications, but, nonetheless, these have to be strictly respectede
The Thermal water of Casciana, Known since 1100 A.D. for their extraordinary properties, owe their fame to Mathilde di Canossa who chose this area as a place to relax. The Mathilde spring has been dedicated to her. where precious water that matches our body temperature, Gushes out at 36 gradi C. Clear, sweet, immagical... the Mathilde spring is calcium-sulfate-bicarbonate water whit incredible beneficial effects for veins, pains and infiammation of the joints, as well as for various respiratory conditions in adults and children alike.

MONTECATINI TERME Spas
The waters of montecatini's spas are especially healing for the liver and the digestive system. The mineral water cure, that consists in drinking water, is appropriate for wide range of liver disturbances, difficulties with liver, stomac, intestines and kidneys.
To the beneficient effects of the mineral water cure have to be added a relaxed life style that consists in walks in the park, an appropriate diet that all of the hotels can offer. Montecatini's waters are saline solutions with a diversified concentration with precious natural substances like those contained in our organism (Sodium, chlorine, calcium, lithium, iodine, phosphorus) therefor the organism has no difficulties in absorbing these substances. We also do complementary therapies like mudbaths and balneotherapies. The therapy has to take more or less 3 weeks, and no less than 15 days. While the resourts are open all year long, the thermal therapy is not linked to particular seasons. To conclude we can say that Montecatini Terme is an ideal city to regenerate its own organism and to spend a relaxing and peaceful holiday.

SATURNIA SPA & Wellness
At Terme di Saturnia Spa & Golf Resort everything is focused on guest's well being. Their psycho-physical balance is given the utmost care and their well being is to be build and maintained through five equally fundamental and integral elements such as hydrotherapy, beauty, stress management, diet and fitness.

Thanks to the support and the advice of the Spa specialized equipe your well-being program is voted to a complete personalization in the way to balance fitness and relax, beauty treatments and thermal cures specifically created on your body and mind needs.

The Tuscan Beauty Farm Terme di Saturnia Spa & Golf Resort gives you the opportunity to regenerate all senses, and to came back to the daily routine with a new spirit. 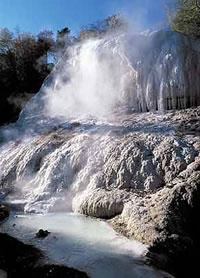 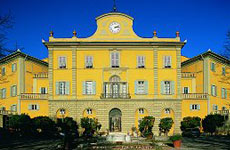 SAN GIULIANO TERME SPA
San Giuliano Water with beneficial effects and calciferous magnesic sulfate water, naturally rich in vital curative elements, gush forth at the foot of Mount San Giuliano at the Spa out of different springs and are gathered in two groups called the "East Baths" (40° C temperature) and the "West Baths" (38° C temperature).
The different types of mud formed by the waters are famous and are the subject of numerous studies by the Hydrological Department at the University of Pisa. The mud and the baths at San Giuliano are particularly prescribed for rheumatic illnesses and the after-effects of injury and sprains. At San Giuliano inhalation treatments are also carried out which are especially indicated for cronic respiratory tract illnesses due to the alkalinity and the particular richness in calcium and the S04 of the water.
With due respect to the spirit which has always enlivened classical thermal water baths, everyone can enjoy the benefits derived from them thanks to the arrangement through the National Health Service.
We have chosen to be available for the wellness of everyone.

Terme di San Carlo
The Terme, well known since the times of San Carlo Borromeo, after whom the spa is named, situated a few kilometres from Massa, is recognised for its extraordinary position close to the Alpi Apuane and the Costa of Versilia. The main attractions of this place are the famous Marble Caves, the beaches along the Tirrenian coast and the numerous cultural engagements and shows organized by the spa centre for the whole season.

Equi Terme
Set in the Parco delle Apuane in the region of Massa Carrara is Equi Terme, a charming spa centre and ideal holiday place. The healty climate and the untouched beauty of the surrounding area, offer the guest total immersion in nature, sport, and art in the fomous castles of Lunigiana.