The territory of the Valdarno is singular and picturesque and begins from the point at which, near Arezzo, the river changes direction and heads north.

The territory of the Valdarno is singular and picturesque and begins from the point at which, near Arezzo, the river changes direction and heads north. Immersed in pre-historic times by the natural flow of the waters of a lake which flooded the basin up until the Tertiary Age, it is a series of gentle slopes interrupted by numerous ridges eroded by rain water. Here everything is colour, the browny- bronze bush of the pines at the top of the gullies, the gloomy oaks at the foot of the gorges with walls of yellowy clay open like open wounds, the eternal silver of the olive groves and the green of the vines which become deep purple every year at the end of the season. Throughout the valley, at an hour’s walking distance from each other, the bell towers and the towers of the old villages, the pievi and the castles rise up, some of which still have Etruscan sounding names such as Loro Ciuffenna, Gropina and Cennina. Because of its opulence, the Valdarno Valley was the object of brutal battles fought between the two cities which, at the end of the medieval period, aspired to dominate Tuscany: The Guelphs of Florence and the Ghibellines of Arezzo.

At the end of the XIII cent., in order to combat the military pressure of the war-mongering Aretine bishops who possessed large properties and well-supplied castles such as Cennina, Casiglione degli Ubertini e Laterina, the Florentines built the three “terre murate”, three fortified towns: San Giovanni, Terranuove and Castelfranco.
After the death of Bishop Guido Tarlati in 1327, the Aretine Republic underwent a slow but inexorable decline until, in 1384, it ceased to exist and its territories were made a part of the Florentine Republic. With this end to the conflict, the limits of jurisdiction of the Arezzo department were set in Valdarno according to a line which also included the three walled cities built by the Florentines a century earlier. Three roads from Arezzo lead to the Valdarno following the entire length of the valley as far as Florence: the Autostrada del Sole, the SS 69 which follows the line of the river and the road of the Setteponti, already in existence in the Etruscan period which emerges out on the hills of the Pratomagno dominating the valley of the imaginary water-line of the lost lake.
Even though the Valdarno maintains an agricultural tradition of wine and olive production of high quality, it is considered to be one of the oldest and most important areas of industrialization of the Arezzo area. The process of industrial development, concentrated in well de- limited zones, has left intact the charm of the landscape and the artistic heritage of the Valdarno area. 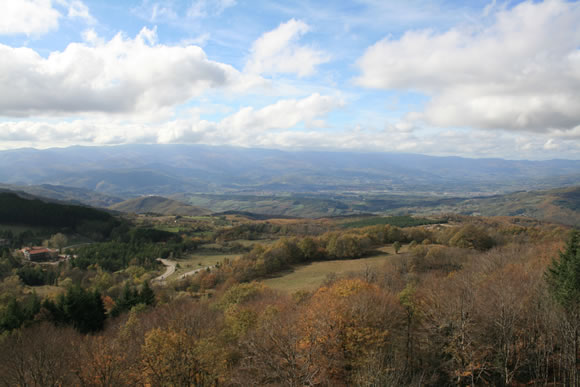