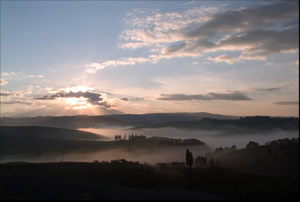 The Park of the Valdera region consists of six municipalities: Capannoli,
Chianni, Lajatico, Peccioli, Palaia, and Terriciola. These six towns have
joined together to work towards a common goal, each retaining its own
identity but working together as a homogenously united team. The region does not present to the visitor the traditional image of a natural protected area.
It is not, that is, a "nature sanctuary", but it is exactly for this reason that it represents a more advanced idea of what a park should be. That which inspired its creators, in fact, is a simple idea-that the ultimate goal of the creation of parks is to create a model of satisfactory cohabitation between Man and Nature.
The creation of "sanctuaries", in this sense, represents a transitory phase, an emergency intervention in order to save something that is about to disappear.
If we consider a park to be a complex and balanced system between Mans and Nature, most of Tuscany could be considered a park, and rightly so.
However, here, in Valdera, there is something more.

Some numbers.
Park is located 25 km from Pisa,
30 km from the pisan seashore, 60

The bell-towers of Valdera
When you arrive, wherever you look you will be greeted by a striking bell tower and a surprising wealth of churches erected over a period of 10
centuries. Each one represents a specific story unto itself, a piece of earth rich with ancient traditions. The calendar of religious festivities is full of celebrations which are open to the public, and includes several that are very suggestive.

Good food good wine.
The "Strada del Vino" (Wine Road) of the Pisan hills, along which there are wine-cellars where you can taste and buy excellent bottles of wine, runs through the Park. Restaurants have an important place here and usually offer a cuisine based on local, organic products. One of the distinctive characteristics of this region is the great number of "aziende agrituristiche", small farms in the countryside that offer lodging and sometimes meals to travelers. 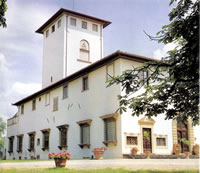 Villa Medici Corsini - Spedaletto -Lajatico
The villa-farm is one of the largest agricultural complexes in the area.
The old complex of Spedaletto stands on the top of rolling hills between the Ragone and Era rivers. Built by the Hospitaller Friars of Altopascio, around the year 1000 it was used as a hospital for pilgrims and wayfarers. In the latter half of the 15th century, when the hegemony of the Medici extended to the Volterra area, Spedaletto became one of the hunting residences of Lorenzo the Magnificent, who tried to make his country dwelling worthy of his court by having it decorated by famous artists such as Botticelli, Ghirlandaio, Perugino and Lippi. The artists frescoed the large entrance hall that leads into the courtyard. Regrettably their work was lost in the fire that broke out in the 17th century. Lorenzo gave the complex and the surrounding estate to his daughter Maddalena, the wife of Francesco Cybo Malaspina. In 1607 Alberigo Malaspina sold the whole property to the noble Corsini family of Florence, who still owns it.
Villa La Torre - Capannoli
The villa is privately owned.
Built in 16th-century style, the villa is located in the village of Capannoli, in the Alta Valdera Park. Erected by the Upezzinghi family of Pisa, the villa passed to the Lanfreducci in 1748, after the death of Jacopo Upezzinghi, the last member of the noble family. The central part of the villa, decorated with frescoes by Domenico Tempesti ad Ranieri Gabrielli depicting ''The Judgment of Paris'' and ''Diana with Actaeon'', is the result of multiple changes made to an old military building. Major work was carried out when ownership of the villa changed, following the marriage of Luisa Lanfreducci with Angiolo Del Rosso Tanucci. The side wings were added, the lemon-house and the vat store were rearranged with the construction of a large terrace and the cellar; lastly, at the will of the pious Luisa, the oratory was converted into the present chapel dedicated to St. Anthony. In addition to defining the space of the park by means of a wall built alongside the Via Volterrana, the architect Luigi Bellincioni constructed the ''Tempietto'', a curious building in the shape of a small castle that was used as a tea room. 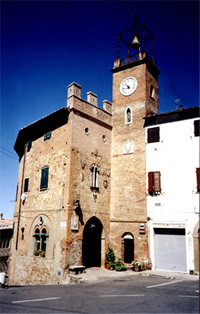 Villa Gotti Lega - Lajatico
The residential palace of the counts Gotti Lega overlooks the central square of the village. The only visible side of the old palace has a wall that is characterized by a central tower embellished with a coat of arms and a window overlooking the courtyard. At the sides of the tower are two emblems representing a ship and the symbol of the noble family.
Palazzo Pretorio - Lajatico
The palace is privately owned and closed to visitors.
The palace, located near the Town Hall, has retained the old prison, which is still visible. Later on it was converted into a convent and is now used as a dwelling house.
Villa Gherardi Del Testa - Terricciola
The villa is occupied by the family of Counts Cempini.
At the entrance to the village of Terricciola is the Villa Gherardi Del Testa, the country residence of the noble Pisan family. The structure of the building has been altered several times over the centuries. In particular, in the latter half of the 18th century, a large depressed vault was constructed which connected the space in front of the chapel with the rear court that looks onto the woods. The last substantial round of works dates from 1883, when a new wing was added to the left side of the villa. Each part has an organic structure in itself and in relation to the landscape, with a terraced garden on the eastern side and a 19th-century garden on the western side. Concerning the interior, the reception room is richly decorated with stuccoes, frescoes and trompe-l''oeil architectures. Above the doors are oval paintings with rural scenes and, at the sides, scroll ornaments and putti. The wooden structures and the ceiling are decorated with imaginary townscapes. In the 19th-century section of the villa rooms are distempered with period motifs.