Parks of the Val di Cornia

The various archaeological and natural sites of our Parks make this area an interesting alternative to the traditional tourist destinations.

Landscape:
The Parks of the Val di Cornia, in the province of Livorno, which stretch along the coastal strip opposite the Island of Elba, tell the thousand-year-old story of a country where the remains of the Etruscan town of Populonia and the evidence of the past activity of mining and metal-working are entwined with the splendid natural environments of Mediterranean sea and scrub.
The various archaeological and natural sites of our Parks make this area an interesting alternative to the traditional tourist destinations: a place where nature and archaeology converge to let you discover the charm of the “Toscana Minore”.
A Tuscany which is still unknown but from a tourist standpoint is greatly appreciated by those who have already discovered it.

The visit :
The various archaeological and natural sites of the Parks make this area an interesting alternative to the traditional tourist destinations: a place where nature and archaeology converge to let you discover the charm of the "Toscana Minore". A Tuscany which is still unknown but from a tourist standpoint is greatly appreciated by those who have already discovered it. 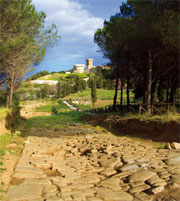 Parks:
The Archaeological Park of Baratti and Populonia
Stretching over 80 hectares between the slopes of the promontory of Piombino and the Gulf of Baratti, it is presented as a real open-air museum, glittering with ferrous slag which show the impressiveness of the industrial Etruscan village. The Park includes a significant part of the ancient town of Populonia, a unique Etruscan settlement built directly on the sea, with its necropolises, the calcarenite quarries and the industrial working quarters for iron coming from the hematite deposits on the Island of Elba. The park is spread over various areas of visit which enable the visitor to appreciate the transformation of the scenery over the centuries.
The wooded coast of the promontory overlooks the archipelago: since days of old the dark silhouettes of the islands including Elba and Corsica have constituted the picturesque scenes of a landscape of land and water. Indeed, up until the modern reclamations, the plain extending to the internal of the promontory of Piombino was a series of lakes and lagunas, rich with fish and swamp vegetation.
This was the landscape of the 8th-9th Century B.C., when important houses were built on the Acropolis to accommodate the most ancient aristocracies of Populonia. From these houses there remains faint and picturesque traces on the summit of the acropolis, not distant from the monumental structures of another Populonia, the Roman one which around the 2nd Century B.C. built important temples, thermal spas and sanctuaries right in the heart of the city. A network of itineraries joins up the city of the houses and temples to the industrial city and the necropolises which lie on the first hills surrounding the inlet. As in ancient times, the routes follow the original roads, crossing the woods and the Mediterranean scrub and opening up to unexpected views alternating over the Gulf of Baratti or the open sea and the Island of Elba.
One of these routes leads to another landscape, that of Medieval times. Among the woods of the promontory, the remains of the Benedictine monastery of San Quirico tell of a lost city and a renewed interest for the natural resources and minerals of the region. 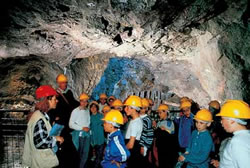 The Archaelogical Mines Park of San Silvestro
Situated behind Campiglia Marittima and the promontory of Piombino, it covers 450 hectares, and it contains unique examples of the mining and metallurgical cycle, from the Etruscan era to the present day.
The routes for visiting encompass museums, mining tunnels, a Medieval village of miners and foundrymen founded around one thousand years ago (Rocca San Silvestro) and paths of historical, archaeological, geological and naturalistic interest.
The Museum of Archaeology and Minerals, located in the Ticket Office building, houses an exhibition of useful minerals and rocks of the Campigliese and the display of some exhibits found during the digs of Rocca San Silvestro. From here the visit to the Park begins: an expert guide accompanies visitors in the Temperino Mine, to the discovery of the evolution of the techniques used for prospecting and extraction of minerals, and the beauty and charm of the underground world.
Coming out of the Mine, there is a climb towards the area of the Earl Shaft, where the storyboards of the Museums of the Mining Machinery and the Miners tell the visitor of the last decades of the mining history, up until the mining crisis in 1976.
The stories of the miners, captured on a video screened in the Morteo, the former canteen, introduce the visit of the Lanzi-Temperino Tunnel, where aboard a train, the journey of the minerals is retraced, from the mine of the Temperino Valley to the production installations of the Lanzi Valley.
The train emerges at the mouth of a limestone quarry, a sign of the first re-conversion of the mining activities and opened by the Mining Company of Campiglia when the closure of the copper and lead mines was inevitable.
Alighting from the train, the visitors overlook the installations which, made for the flotation of minerals, were re-converted into installations for the crushing of the limestone.
The remains of Rocca San Silvestro, which stand majestically on the background of this valley, represent the heart of the Park. 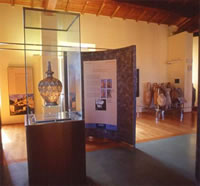 The Archaeological Museum of the Territory of Populonia
The Museum is an integral part of the Archaeological Park of Baratti and Populonia project, and is the main show-case for the network of Parks of the Val di Cornia. With the aid of attractive reconstructions of ancient landscapes, activities and settings, it explains the changes brought about by man's presence on the promontory from prehistory to present times.
The Museum is housed in the Palazzo Nuovo in the historic centre of Piombino. The Palazzo was built in the early 19th century for the ruling couple Felice and Elisa Bonaparte (Napoleon's sister), within the fortified "Cittadella" which Leonardo da Vinci had been involved in designing.
The Museum has been able to exhibit such a wealth of archaeological finds thanks to a pioneering agreement between the "Ministero per i Beni e le Attività Culturali" ("Soprintendenza per i Beni Archeologici della Toscana"), the "Parchi Val di Cornia S.p.A." and the "Comune di Piombino". This agreement is in accordance with legislation governing collaboration between the Italian state, the "Regione Toscana", local authorities and cultural agencies. It laid out over 1800sq.m. on three floors.
The museum exhibits more than 3000 artefacts including prehistoric tools, finds excavated in Populonia's Etruscan cemeteries, and Roman objects.
Outstanding among these latter is the silver amphora found in 1968 in the sea between Baratti and San Vincenzo, a masterpiece of great intrinsic and artistic value.
The scientific exhibition project, handled by the Department of Archaeology of the University of Siena, has focused much attention on the teaching and communication aspects of the scientific data.
The visitor follows a route tracing historical development interpreted on the basis of the relationship between man, territory and resources, among which the theme of iron production, past and present, assumes a particularly important role. 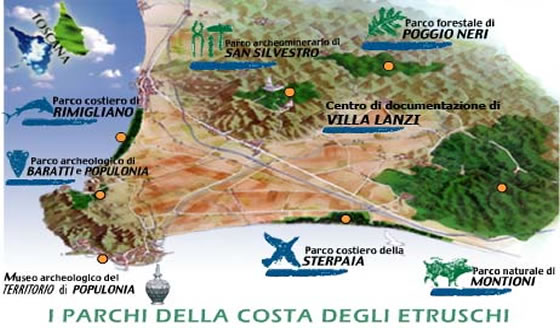