The territory of the Val d'Orcia is made up, mainly of a hilly landscape with gently rolling hills and valleys typical of the Sienese Crete and a rich variety of vegetation.

The territory of the Val d'Orcia is made up, mainly of a hilly landscape with gently rolling hills and valleys typical of the Sienese Crete and a rich variety of vegetation. The river Orcia springs from a gorge and winds its way across the valley. The geographical history of the area began 5 million years ago when the sea receded, leaving behind sand and clay deposits which gave origin to the surface of the valley. Later, two volcanoes, Radicofani and Monte Amiata, covered the surface with lava, which when it cooled, became a rock now known as trachyte .
Erosion of the soil has played a major role in the formation of the landscape with the clay soil laid bare and forming craggy badlands known as calanchi and clay knolls otherwise called biancane or mammelloni, which can be seen in the areas of Casa a Tuoma (Pienza), Ripalta (San Quirico), Lucciolabella, Beccatello, and Torre Tarugi (Pienza), Contignano, Pietre Bianche and the Poggio Leano (Radicofani).

North west of Bagno Vignoni a magnificent rocky gorge covered with woodlands and Mediterranean maquis opens out onto the vineyards of Montalcino and then continues to the sea. On the slopes of Monte Amiata are forests of beech and chestnut trees and of particular interest and rare beauty is the holm oak woods of Scarceta. The Abetina del Vivo with ancient silver fir trees is situated near the old village of Vivo d'Orcia famous for its springs which provide water for much of the area.
Other tree species found throughout the area are the holm oak, turkey oak and downy oak which cover the territory in woodlands which become thicker towards the Maremma. 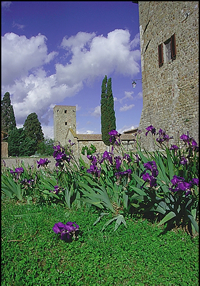 However the tree which has become a symbol of the Val d'Orcia is the cypress.
The Val d’Orcia is also home to a large variety of wildlife such as the porcupine, badger, beech marten, polecat, weasel, fox, and wild boar.
The presence of the wolf has also been noted in the territory of Radicofani where sheep farming is widespread.
It is an ornithologist’s paradise with the barn owl, long-eared owl, eagle owl and little owl, as well as birds of prey such as the buzzard, harrier eagle, hen-harrier, and kestrel. You can also spot the black and green woodpecker, the raven and hooded crow, the wryneck, flycatcher and bee-eater, to name but a few.