The Tuscan Tiber valley ( Valtiberina) presents itself to the curious visitor as a huge mosaic of different environments, offering a rich multiplicity ofshapes, colours and perfumes. 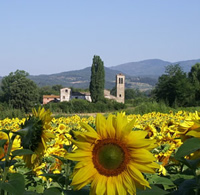 The Tuscan Tiber valley presents itself to the curious visitor as a huge mosaic of different environments, offering a rich multiplicity ofshapes, colours and perfumes. If we return to this frontier land frequently and in different periods of the year, we can also sample the changing reality caused by the passing of the seasons. The Upper Tiber Valley, the most eastern point of Tuscany wedged in between Romagna, Marche and Umbria; a border land and, therefore used to and influenced by these differences, but also the very Tuscan identity is reinforced and accentuated by these differences.. The regional limit doesn’t end along the crest of the Appenine mountains, which is normally the case, but it goes way beyond it, touching Montefeltro and even, past the boundary, it ‘floats’ surrounded by Marche land, an island belonging to the Tiber valley territory: the Cicognaia enclave. In this area there is a contact and contrast of different and numerous geological formations which, due to preceding geological dynamics, contribute to the formation in this extreme outpost of Tuscany, of a huge variety of forms which have decidedly influenced the life of mankind by determining the various agricultural and forestry activities.
The land surrounding Anghiari of river-lake origin, beckons us to discover how in ancient times there was a lake in the middle of the Appenines, today the only memory of this lake is the red clay which often causes problems when ploughing but which on clear winter days seems to be a vast ‘flowered’ mineral meadow. Between Anghiari and Pieve Santo Stefano, we can find ophiolite rocks, a geological joke of underwater magma origin.
These rocks provide different chromatic stimuli: in some places green and scaly like snakeskin, in others shiny like a metal, sometimes they are really dark with a formal crudeness which makes us forget the typical softness of the Tuscan countryside. The Monti Rognosi and Monti Serpentini of Pieve Santo Stefano give rise to terrain which is not particularly adapted to agriculture but nowadays they are a part of the protected areas of the province of Arezzo due to the presence of particular vegetation which have adapted themselves to the trying living conditions generated by these rocks. In the borough of Anghiari, they are familiar with working with metals as in past centuries there was a flourishing activity of craftsmen linked with the production of high quality firearms.

As always happens, the changing of the geological formations can also be read in the very old buildings; to create houses, towers or castles normally stone material was used from the surrounding rocks. In Pieve Santo Stefano you can find the stone called bianco alberese, from which, amongst others, soils which are often covered with grass or woodland derive.
Another world has created water courses over time in the Tiber Valley, depositing in the depressions starting from Pieve Santo Stefano ending under the hill of Monterchi, the 'treasure chest' of Piero Della Francesca's Madonna del Parto, precious earth for flourishing agriculture, thus forming the flood plains. The biggest, that of Sansepolcro, is bordered by the slow course of the Tiber, which as soon as it leaves the great reservoir of Montedoglio, recreates the river which gently winds along in the background of the Victory of Costantino over Massenzio, depicted in the frescoes by Piero della Francesca in the basilica of Saint Francis in Arezzo.
The flat countryside has adapted itself to the new demands of man and the ordered and continuous knitting of regular fields surrounded by vines married to the field maple, which is still visible here and there, has given way to wider fields, adapted to mechanised agriculture.
The 'artist's palette' of the Tiber valley is still rich in colours, even if the yellow of the sunflowers, which takes over the month of July, the green of the Kentucky tobacco and the other crops which are grown at rotation have replaced the crops of isatis tinctoria, a pigmented plant which gave us the colour blue, and the elegant plants for weaving. From the hill of Anghiari the view of the plain in the early hours of the summer mornings is fascinating: the weave of new colours give it life while the Lombardy Poplars continue to embellish it.
Sansepolcro and its bell towers emerge at the very bottom and remind us once again of those depicted by Piero della Francesca behind the shoulders St. Jerome in the painting kept in Venice, surrounded by mountainous areas which are less and less cultivated but richer in woodlands the higher you go. The mountains are completely different. 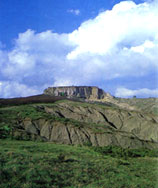 Thanks to the imposing movements of the earth's crust, that which millions of years ago was the bottom of a depression has risen upwards and now constitutes the grey and powerful banks of the marna, a sedimentary rock and sandstone formations of the Alpe della Luna of today, creating spectacular contrasts like the vertical 'steps' of the Ripa della Luna. The marna badlands, harsh and at times disturbing for their lack of vegetation, which emerge just before Badia Tedalda are contrasted up to Sestino with the velvety summer yellow of the cereal crops and pastures, punctuated by the reassuring silhouettes of the Chianina cows with their porcelain white coats.
The surrounding woods, rich in turkey oaks, a rustic oak, for centuries sanctuary for the wolf and spectacular in autumn, loosen their embrace, leaving room for the weave of the 'closed fields', each one rigorously divided by hedgerows.
Up until the last century, at the end of the summer, processions of animals and men left these areas, following the dusty tracks of the migration of herds, to arrive after a few days of walking at the pastures of the Maremma region: the villages only came back to life when they returned at the end of spring. These environments are fascinating but also difficult as not even the chestnut will grow here.
They are areas adapted above all to herdsmen or woodcutters yet, in this chalky earth, able hunters can find a very precious product: the white truffle.
Above Sestino, two enormous blocks of marine limestone constitute a surprisingly suggestive geological emergence: the Simone stone which from one side testifies the ancient history of the fortress city of the stone and from the other, together with the Simoncello mount in the Marche region, documents the age old movements of the earth's crust. Another geological formation is present in the Tiber Valley, the Macigno (boulder), a sedimentary rock which makes up the Tiber side of the Catenaia Alp. A gradual change in its constitution gave rise to the soil adapted to the cultivation of chestnut trees, making the territory of Caprese Michelangelo slightly 'richer'. The presence of the chestnut has in fact given forth better nutritional conditions, compared to those of other more meagre mountain areas of the Tiber valley, and the development of an articulated culture based exactly on this precious woodland product, which even today is bountifully harvested and famous for its exceptional quality.
If the geology of this territory creates differences, there are also communal and transversal natural elements. For example, in most places local enthusiasts know where to find different types of truffles and mushrooms, of which the local cuisine expertly takes advantage.
To end, there is also the poetry of an enchanting countryside, like that of the cold winter mornings when the tips of the beech trees are covered with the shining embroidering of crystalline ice, known as Rime frost, comparable for its elegance to the famous tombolo lace making of Sansepolcro.