Versilia by bike is a programs of the general duration of seven days propose visits in places of particular historical, architectural and naturalistic interest.

Vacation proposals are just one of our website innovations.
These programs of the general duration of seven days propose visits in places of particular historical, architectural and naturalistic interest. They give the possibility for the visitor to discover unknown and suggestive aspects of Versilia. The programs could be modified to adjust any personal interest or holiday length

Vacation proposal 1
first day
Morning: San Rossore Natural park, Migliarina and Massaciuccoli: the San Rossore estate and Massaciuccoli lake, constituite the major attraction of a landscape dominated by nature
Afternoon: visit to the ancient Roman villa near the lake of Massaciuccoli. Dated back to the first century B. C. it has been attributed to the pisan family of the Venuleis
second day
Morning: Along the shore to north of Viareggio, visit to the "Il rifugio di Venere", last abode of Paolina Bonaparte. It also hosts the Archaeological Museum, a rich art gallery with paintings of the '900 and musical tools museum.
Afternoon: visit of the 'Matilde' Tower , and the ' passeggiata' (promenade) on waterfront of Viareggio, admiring the Stores 'Duilio 48', the lidos 'Balena', Villa Argentina and the hotel Excelsior, with its splendid curvilinear façades made of ceramic mosaics. 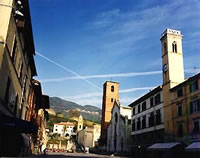 third day
Morning: visit to Pietrasanta, ancient point of passage of the 'Francigena' route, and its splendid historical buildings as the 'Collegiata di S.Martino', the 'Palazzo Pretorio' and the 'convento di Sant'Agostino'.
Afternoon: visit to the native house of Giosuè Carducci. The house immersed in the green of 'Valdicastello', district of Pietrasanta, has been declared national monument since 1907.
fourth day
Morning: visit to the widest European cave: 'Antro del Corchia'. Located in 'Levigliani di Stazzema' the cave was discovered in 1841 by the speleologist and geologist Giuseppe Simi.
Afternoon: Visit to the Church of Saint Maria Assunta of Stazzema. Situated at the beginning of the village its origins go back to the IX century, perhaps it was built on the rests of an ancient pagan temple.
fifth day
Whole day: Regional park of the 'Apuane Alps', a vast mountain area wild and unspoiled. Its main attraction is the Monte Forato (mountain with a hole). The calcareous mountains show, in the subsoil, phenomenon of 'carsica' origin and traces of the human presence of prehistoric age

sixth day
Morning: visit to the splendid Abbey of 'San Pietro' in Camaiore founded in the VII sec byBenedictine monks. The monastic complex surrounded by walls, was ancient point of reference for the pilgrims that crossed the 'Francigena' route.
Afternoon: Itinerary of the villas of 'Massarosa' This route is known for the splendid panoramic views and for the numerous and elegant noble villas (27 in all), the most famous of which is 'Villa Baldini' in Campignano.
seventh day
Whole day: One day visit to 'Forte dei Marmi'. An opportunity to visit the beautiful historical center, to stroll along the seaside admiring the splendid beaches, to walk in full relax along the streets rich in shops and high fashion boutiques, or to just enjoy the numerous parties and markets that animate this seaside town during the whole year.


Vacation proposal 2
first day
Morning: Visit to Massaciuccoli and the nearby archaeological area. The etruscan village is one of the most interesting of the entire Versilia. With the installation of 'St. Rocchino' is also possible to admire testimonies that date back to the VII century b.C.,
Afternoon: Discovery of the 'Matanna' Mountain by mountain-bike. Along an interesting itinerary in the southern part of the Alps Apuane you will be crossing terraced fields and ancient paths up to the gratifying conquest of the peak with its splendid panoramic view.
second day
Morning: in the green of the 'Versiliana' Park , A vast secular wood (over 80 hectares) whose origins date back to the period of formation of the Versilia lowland, this splendid angle of nature reached us almost intact.
Afternoon: Visit to the distinctive 'Villa Nistri' of Viareggio, built in 1912, . The oriental style decoration and architectural originalities make this building unique in its kind. 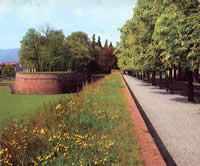 third day
Morning: Sant'Agostino of Pietrasanta is considered one of the main Gothic buildings in the Province of Lucca; the church dominates the central plaza of the historical centre of Pietrasanta
Afternoon: Visit to the marvelous 'Rocca di Sala' bastion ghibellino built to defend the town of Pietrasanta, the top of the building offers the best view of the historical center
fourth day
Morning: Visit to 'Torre del Lago' an angle of Versilia set between the lake of Massaciuccoli and the Tyrrhenian sea, ideal habitat for many faunistic species as testified by the presence of near WWF and LIPU natural reserves.
Afternoon: Still in 'Torre del Lago' it is possible to visit the splendid 'Villa Puccini' The mansion, built by the maestro when he discovered these splendid places while hunting, has become an abode-museum.

fifth day
Morning: Visit to Elici and its splendid parish devoted to St. Pantaleone; the Parish dated back to the year 892 dominates from a rock onto the Plain of Massarosa and it is considered one of the jewels of the Romanesque architecture .
Afternoon: Trekking along a ring route to 'Grotta dell' onda' (Cave of the wave) and across the valley of Camaiore. The area, rich in woods, and prehistoric testimonies has many of interesting aspects confirmed by many archaeological recoveries. A medium demanding itinerary of the average duration of 5 hours (going and return).
sixth day
Morning: Following the easy bike path 'Fausto Coppi' from Viareggio, through 'Lido di Camaiore' and 'Forte dei Marmi' we reach 'Marina di Massa'
Afternoon: Afternoon of relax, walking through the streets of Viareggio. Time for shopping, and breaks in the numerous café, surrounded by luxurious athmosphere of the palaces on the waterfront with its splendid liberty facades of the beginning of last century.
seventh day
Morning: An itinerary to the 'Lipu' oasis of Massaciuccoli. We walk along a series of wood wharfs admiring the wild life of the lake, a unique exciting discovery step by step
Afternoon: Visit to the Parish of the 'San Giovanni e Felicita' near 'Valdicastello'. Built before the year 1000, The curch is surrounded by olive trees and is one of the most characteristic and ancient building of Versilia.