A Tour of the villas and gardens of Pistoia

Set in the Tuscan countryside among farmhouses and hamlets, woods, cultivated lands and gardens, the villas of Pistoia bring together many things.

Set in the Tuscan countryside among farmhouses and hamlets, woods, cultivated lands and gardens, the villas of Pistoia bring together many things; the work of the country, study, conversation, the love of good works, of art and nature, and of the balance between natural and man-made beauty.
A tradition that began in Medieval times, enriched through the Renaissance, the Baroque and the reformations of the 18th century, and which can be experienced today by visiting a villa.

Villa Puccini di Scornio - Pistoia.
A few kilometres out of Pistoia, heading towards Capostrada, is the Villa Puccini. In the 18th century Tommaso Puccini commissioned the Pistoia engineer Buonsignori to design the villa. In the park surrounding the villa there are many statues and species of exotic plant. The villa is currently used as a music school and is the Academy for Italian organ music. The park is open to the public.
Villa di Celle - Santomato, Pistoia.
Heading from Pistoia towards Montale we find the Villa di Celle, in Santomato. The Fabbroni family, a noble family of Pistoia, transformed the building and tidied up the garden, under the expertise of the architect Giovanni Gambini. In 1969 it was bought by the entrepreneur Giuliano Gori, an art collector, who created a wonderfully rich open-air museum of contemporary art set in the green of the estate. There are also many species of tree in the park, including fir, cypress and pine. 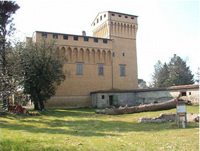 Villa Smilea - Montale.
Not far from the Villa di Celle, around the Montale area, there are still several villas, including the architecturally charming 14th/15th century Villa Smilea, notable for its two high towers. Originally a fortification, the villa then became a high-class residence and commercial farm. Recently acquired by Montale Town Council, it now houses, among other things, exhibitions of modern and contemporary art.
Villa La Magia - Quarrata.
Close to the centre of Quarrata, this villa, designed by Buontalenti, retains its late-Renaissance architectural features, with its stone window frames and a stonework gate embellished with columns, through which we enter the park of oaks, holm-oaks and walnut trees.
Villa Forini-Lippi - Montecatini Terme.
Not far from the centre of Montecatini, this Villa, a summer residence for a noble Florentine family during the 18th century, is surrounded by a large park. It currently houses the public library.
Villa Feroni di Bellavista - Borgo a Buggiano.
In Borgo a Buggiano, towards Ponte Buggianese, it is worth visiting the Villa di Bellavista, one of the most important examples of Tuscan Baroque, and today the site of the Museum of the Fire Brigade. Designed by Antonio Maria Ferri, the most fashionable architect in Tuscany at the end of the 17th century, the interior is decorated with frescoes by the artist Pier Dandini. The garden is divided by a great avenue, flanked by statues and ornamental vases. 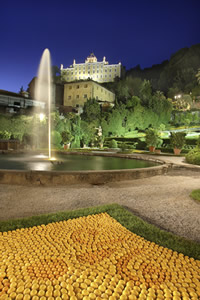 Villa Garzoni – Collodi, Pescia.
Renaissance and Baroque merge in the house and gardens of the Villa Garzoni. The imposing stairs are spectacular, with a central waterfall separating a double flight of stairs which are decorated with mosaics and terracotta statues.

Just outside Lamporecchio, in Spicchio, the Pistoian Pope Giulio Rospigliosi had a splendid villa built in the second half of the 17th century, designed by Gianlorenzo Bernini, and often still known today as the Villa di Spicchio. Inside, the great oval hall is decorated with frescoes by the artist Ludovico Gemignani. The entrance to the villa is preceded by a long avenue of holm-oaks. The garden is a large lawn with a central pond.
Villa Renatico - Monsummano Terme.
This villa, today public property, is near the centre of the city. It was built for the journalist, writer and politician Ferdinando Martini by the architect Cesare Spighi in 1887. Inside, the rooms are decorated with coffered ceilings with coloured ceramic rounds. The villa is set in a large park. Today the Villa renatico houses the “Mac, n”: the museum of contemporary art.
Villa la Guardatoia - Collecchio, Pescia.
This villa is situated a little out of Pescia, and has belonged to the Cecchi family since the end of the 17th century. The park is a large lawn laid out in front of the villa, with gardens to the left and right.