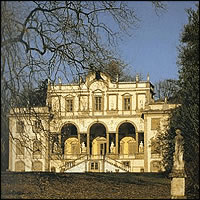 one of the most representative of the old aristocratic Republic's culture and society. The Mansi were a family of silk merchants already very well-known in 16th century Europe when they worked in close contact with other Lucchesi families like the Buonvisi, Antellminelli and Cenami. And it was from this last family that they bought the Villa in Segromigno in the 17th century.
The original building constructed in the second half of the 16th century, was transformed to a large part between 1634-1635 by Muzio Oddi, an architect from Urbino. Then, under the Mansi, the front was rebuilt by Giusti, a local architect, and the project to transform the garden was given to Filippo Juvarra who must be attributed with the enclosure of the grounds, the water system and the division in three of the garden itself. The trapezium cut of the garden to the east and the stables gave Juvarra the opportunity to lay out the other two sections of the grounds, the large lawn around and in front of the house and the large garden to the west.

They became four principal sectors, side by side but autonomous in perspective, alternately overturned and more or less in a long trapezium shape. Amongst the numerous frescoes decorating the inside of the Villa, those in the central hall are by far the most interesting, thanks to the work of the neo-classical painter Stefano Tofanelli, much appreciated by Elisa Baciocchi, Princess of Lucca and Napoleon Bonaparte's sister. These paintings consist of two great canvasses at the sides that show Apollo's feats (Judgement of Midas and Death of Marsyas) and the fresco on the ceiling portraying the 'Triumph of the God Sun'.
Villa Mansi, famous for the grace of its gardens and elegance of its architectural lines, has often played host to sovereigns and ambassadors from all the states of Europe who were invited by the Republic of Lucca for a pleasant sojourn. 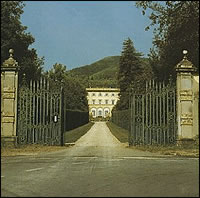 Villa Grabau at S. Pancrazio was built on the ruins of a medieval quarter by the Diodati, a family of powerful Lucchesi merchants, in the fifteen hundreds. In successive centuries, the villa passed to the Counts Orsetti and then by marriage to the Marquises Cittadella.
Over time the different proprietors transformed its original Gothic character, initially to Renaissance, and then finally to its present Neo-Classical style.
In 1868, the villa went from the Cittadellas to Rudolf Schwartze, a rich German banker living in Livorno and married to Carolina Grabau, who was from a noble family of German origins.
The nine hectares of park land are amongst the most interesting in Lucca's surrounding territory both for its form and the richness and rarity of the plant species making up the various architectural gardens.

The 'English Garden', in existence since the 16th century, was undoubtedly formed with autochthonal species that still exist in ample thickets where one can admire the remarkable dimensions of specimens like the oaks, holm oaks, hornbeams, limes, wild maples, laurustine, typical plants of a spontaneous garden. Amongst the various species that merit note is the Michelia figo known as the banana bush and the Quercus x Andleyensis a sterile hybrid created by man and that can only be found in this park.
The 'Italian Garden', with its backdrop of beautiful rolling hills, appears to be a semioval terraced garden animated by the advancing perspective of high hedges that form a screen which appears like convex waves broken at intervals by female marble statues representing Ceres, Venus, Pomona, etc. It encloses over one hundred lemon trees in ancient terracotta vases stamped with the coats-of-arms of their purchasers. In winter these are moved to the imposing lemon house whose structure dating back to between 1600 to 1700 is of notable architectural value and is certainly amongst the most beautiful and important within Lucca's boundaries.
There is also the "Theatre of Greenery" with its gracious and elegant boxwood stage for concerts and other performances during the summer. On the two central fountains in the Italian Garden, there are two very visible, magnificent, bronze masks of satyr heads dating from the period of late Florentine mannerism and attributed to Pietro Tacca (1577-1640). 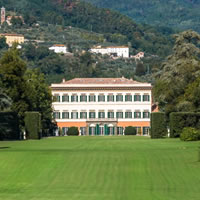 An illustrious property enjoyed by the great and the glamorous for centuries. Few settings in Italy are as rich in allure, beauty and a vivid sense of history as Villa Reale. The timeless elegance of the grounds will charm and delight, perfect for a relaxing walk.

The 17th century Villa Reale di Marlia lies in the heart of Tuscany, near Lucca, in an exceptional location at the foot of the Pizzorne hills. Home in the 19thcentury to Napoleon’s sister and Duchess of Lucca Elisa Bonaparte Baciocchi, the Villa is encircled by high walls, seemingly protecting it from the passing of time. Villa Reale is considered to be one of the most important historical properties in Italy. The 16-hectare estate includes numerous refined gardens and botanic rarities, as well as majestic buildings created over centuries. The Park features a splendid Water Theatre, the world famous Green Theatre (where the composer Paganini often performed for Elisa Baciocchi), pathways lined with Camellia flowers, and is enriched by a Lemon Garden with a group of marble statues depicting Leda and the Swan, and a Spanish Garden in Art Deco style. Several historic buildings add to the experience, including the 16th century Villa del Vescovo with its nymphaeum, named the Grotto of Pan, and the elegant 18th century Palazzina dell’Orologio with its panoramic loggia.

Two itineraries, Water and Architecture, create a circular route around the Villa, monuments and gardens, inviting you to discover beautiful works of art and breathtaking views.

The Park
The Park of Villa Reale of Marlia covers an area of 16 hectares and is the result of a complex series of transformations which bear witness to two different periods of architectural construction among the villas in the Lucca area. One part of the park has preserved the original 17th century layout including hedges, flowerbeds and tall trees; the other has been designed in line with the fashion for English landscaped gardens, with winding pathways, panoramic viewpoints and shady groves. The gardens have a rich heritage of trees, with superb examples of abies, quercus palustris, pine, oak, holm-oak and plane trees. The lawns, together with shaded underwood areas, embellish the Villa del Vescovo with a unique landscape which changes throughout the course of the day and with the passing of the seasons. Taking a walk around the gardens, you’ll discover a host of beautiful views, hidden corners and impressive architecture. 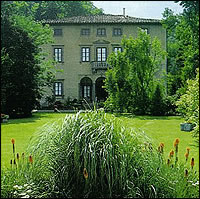 Villa Bernardini is a valuable example of late Renaissance architecture. It was built by Bernadino Bernadini in 1615, as is testified by the inscription on the stone frieze adorning the architrave over the main portal, which reads: 'BERNARDINUS BERNARDINIUS A.D. MDCXV'.
At the centre of the grounds and cubic in form, it is on two floors with an attic and cellar and a three-arched portico to the front. It has always remained in family hands and has been subject only to minor modifications internally, these taking place in 1700 on the occasion of Francesco Bernardini's marriage to Marianna Parensi.
The various salons, halls, drawing rooms and bedrooms are completely furnished with furniture and furnishings from the sixteen, seventeen and eighteen hundreds and many of the armchairs, tables and chairs commissioned by the Bernadini have been engraved or painted with the family coat-of-arms making them particularly interesting to the studious or impassioned visitor.

The large, heart-shaped front lawn gently slopes towards the entrance gate still framed and dominated by two sequoia planted in the middle of the 1800s whilst, in the rest of the garden to the front and close to the villa, there are groups of unusual and interesting plants and shrubs.
To the side, on the right, one enters a wide garden that was once the vegetable garden but which was transformed into a secret garden in the middle of the 1700s. From there it is possible to access the lemon house made precious by its contents of centuries-old Ficus Repens which cover the walls and a grand, Empire style, Carrara marble pond which stands at the entrance.
The most important part of the grounds is to the rear where one can find a remarkable open air theatre in Buxus sempervirens built on land excavated in the middle of the 1700s.
It is uncertain who was responsible for the project, as per the testimony on the model of the theatre to be found in the Villa, which reads: 'T.e Petri (...) Fecit'.
The cavea with its irregular profile can seat 650 and is formed by two double rows of box trees that circumscribe a wide sloping area and that are precisely defined by round figures sculptured in their greenery which individualise the acoustic and visual points of reference. 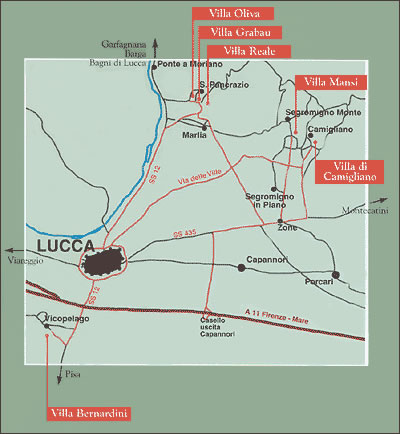