The Carmignano wine, already known more than six centuries ago, has obtained the prestigious Denomination of Controlled and Guaranteed Origin DOCG

The wine of Carmignano, already known more than six centuries ago, and bought and sold at a high price by the secret merchant of Prato, Francesco Datini, had an important recognition with the safeguard of Cosimo III (1716), which established rules, controls and areas production of the four most appreciated wines: among these the Chianti and the Carmignano. The work of enhancement and protection of the products of the area is now carried forward by the Carmignano wine conventions, which has obtained the prestigious DOCG Denomination of Controlled and Guaranteed Origin for the "Carmignano" (mainly composed of Sangiovese and Cabernet) and the "Chianti Montalbano" (sangiovese, canaiolo etc.), while DOC "Vin Ruspo" (young and sparkling, obtained with fermented must at low temperature) and the exceptional "Vin Santo: must obtained from dried white grapes are excellent" on mats until January, it is matured in caratelli placed in lofts.We allow us to conclude with the warning of the Redi:
it will be madness, and very bad sin, to drink Carmignan when it is watered down!

The Museum of Vine and Wine
The Museum, dedicated to the Medicean Wine Road of Carmignano, condenses information that refers to the outside: when it finishes the visit to its rooms it begins in fact the cellars of the farms but also the villas, the parish churches, the Etruscan tombs, the Park Museum Quinto Martini, trekking paths, restaurant menus.
The entrance, marked by the seventeenth-century colors of the grapes of Bartolomeo Bimbi on the two sides of a narrow corridor, is an immediate immersion in the suggestion of an imaginary vineyard row.
Following is a historical summary of the formation of the municipal territory that dialogues with that of wine: on one side the tomb of Montefortini, the Villa di Artimino, the Parco Museo Quinto Martini and on the other an Etruscan crater, a Renaissance jug, a destructured fiasco from Quinto Martini.
From the synthesis then, to the analysis with the direct approach to the document: splendid colored eighteenth-century maps of the Barco Reale and of farms, municipal statutes, letters of factors, colonic librettos.
The stops are part of the route: from a screen you can see a rich collection of video-interviews with various witnesses of local agriculture. The sharecropping of every Tuscan wine gives the picture of its evolution over time through a choice of images on the surviving signs of tradition as well as materials and tools relevant to the theme: earth, stone, chestnut, copper sulphate crystals.
We then move on to a space where the fame conquered and attested over the centuries by Carmignano is rebuilt.
Inside it the Federigo Melis wine collection was also deposited, a deep connoisseur of the characteristics of many wines from all European countries. More than 800 bottles ordered by territorial areas and even by producers document the wine production of the first decades of the post-war period.
The route ends with the premises for its continuation outside: in a large space information is also provided cartographic on the regional and local wine routes and the navigation in the theme is urged: computer terminals to visit other museums and themes via the Internet linked to the way of making and tasting wine over time. 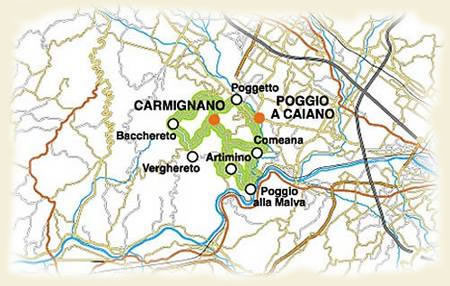