The Monteregio di Massa Marittima wine trail crosses the Metalliferous Hills in the High Grosseto Maremma. Since it is situated in a central position in relation to wine-growing areas, one can easily reach places of cultural, artistic, archeological, viticultural, gastronomic and natural interest. Along the route the visitor will be amazed at how such beauty and variety of landscape, embraced by hills and sea, can have escaped mass tourist invasion. Thus the visitor has the opportunity to discover one of the best-kept secrets of Tuscany, along of course with its splendid wine.

This trail winds among the fascinating metal-bearing hills of the high Grosseto Maremma. The tour starts with an exploration of winery cellars and then broadens to include farmhouses, wine-tasting, excellent restaurants, local products and crafts. Visitors find themselves in a natural paradise where the peculiar character of Tuscany merges with that of the wilder, more rugged Maremma. The villages along the route are chock-full of history, art, and natural attractions. We have divided this trail into three "mini-itineraries":

Monteregio wine itinerary 1
This route runs through the Comuni of Monterotondo and Follonica, but its highlight is Massa Marittima, whose centre and main square are stunning esempios of medieval town-planning. The Trail Information Centre is to be found in the Building which used to be the Town Mint. Other attractions of this route include Accesa Lake, the medieval castles of Lecceta and Cugnano, the Longobarde di Bagno del Re spa, and Montioni Park. They are all worth a visit. 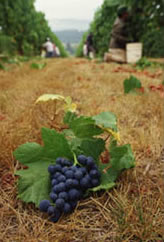 Monteregio wine itinerary 2
This route winds mainly through the Comune of Roccastrada , a plain at the foothills of the rugged Metalliferous Hills on which stand numerous medieval villages: Roccatederighi, Sassofortino and Montemassi. The last is immortalised in "Guidoricci da Fogliano", a work attributed to Simone Martini and on display in the Siena Town Hall. The nature reserves of La Pietra and Torrente Farma are also of enormous interest. 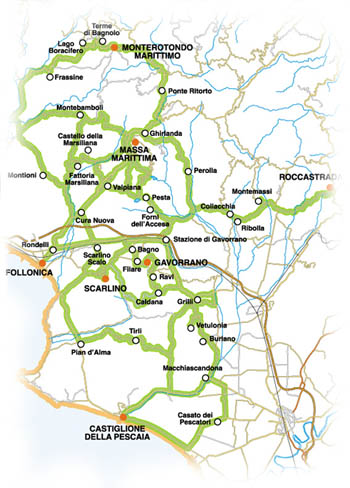