In Tuscany there are many areas in which various types of truffles grow. 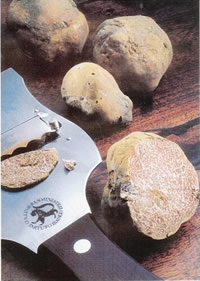 In Tuscany there are many areas in which various types of truffles grow. It is possible to find black truffles, above all around the Apennines, and the white truffles, in San Giovanni d’Asso and in the hills surrounding Volterra. The most important area remains San Miniato, the central Italy white truffle capital. San Miniato offers a very good product, which competes with the more famous truffle of Alba. Almost half of the Tuscan production comes from the hills of San Miniato, from the little villages of the Val d’Egola such as Corrazzano, La Serra, Balconevisi, and the municipalities of Montopoli, Palaia and Volterra.

The periods of ripening and picking depend both on the single species and on climate factors: the white truffle is usually picked from September until early January. In the hills of San Miniato, the first truffles that are picked are called “di marca”, which means that they have been found in the soil upper layers and present a feeble aroma. The research goes on until the end of October and the beginning of November, which is considered the best period for the picking of the white truffle, which has completed its ripening. During January and February, the picking of the “marzuolo” starts. The marzuolo is of lower quality compared to the white truffle.

The classification of the truffle varieties depends on their shape, colour, and number of spores; the weight ranges from a few grams to few quarters of pound, and it rarely reaches one kilogram.

The white truffle
The excellent and rare white truffle is found about half-metre below ground , in clayey soil, close to pits and woods where the soil is fresher and, above all, in symbiosis with poplars, willows, lindens, oaks, and nut trees. For the exploration, during the period between October and December, trained dogs are necessary. Once also pigs were used. The colour of truffles ranges from grey to light ochre, and they have generally the size of a walnut. The smell is strong and pungent. It is used, cut in very thin flakes, to season risottos, tagliatelle and meat dishes.
The villages around San Miniato organize, from October to early November, the fairs dedicated to the white truffle. The chief attraction is the “Mostra Mercato Nazionale del Tartufo Bianco” (a national fair of white truffle), that takes place in San Miniato during the last three weekends of November.

The marzuolo truffle
This truffle is often thought to be the white truffle, as its picking takes place during the same period, although the ripening period is in February-March. In Cigoli, nearby San Miniato, at the end of March there is the first fair of the year, dedicated to the less appreciated marzuolo truffle.