Road of wine Coast of Etruscans is situated at a few kilometres from Bolgheri is an area called California.

Great wines, so great to draw the attention of specialized magazines and connoisseurs around the world. Situated at a few kilometres from Bolgheri is an area called California. Perhaps it was destiny for this area to become the Italian California or, as others say, the Italian Bordeaux.
Two dynasties of wine-growers have descended from the sisters of Dante’s “Conte Ugolino della Gherardesca” (Count Ugolino of the Gherardesca). One sister married a member of the “Incisa della Rocchetta” family, while the other married a “Antinori Mario Incisa”, who created the Sassiccaia, considered by an important monthly magazine “the most famous Italian wine in the world”.
The Antinori brought the century-old experience and prestige of the “vinattieri” (wine-growers in the Tuscan dialect) everywhere. Lodovico Antinori created one of the most suggestive wine cellars in Italy and started to produce the prestigious Ornellaia that, in 1995, was recognized by the magazine Decanter as the best Italian cabernet and, in 2002, as the best wine in the world. Piero Antinori converted the production of rosé wine, very fashionable in the seventies, into an excellent Guado al Tasso, that immediately became one of the most important Italian productions. 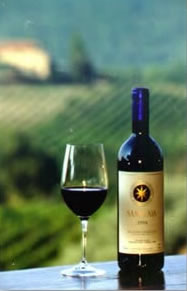 But the progress goes on: besides the Sassicaia, the Ornellaia and the Guado del Tasso, there has been a bloom of young and enthusiastic producers that, lured by the great names, have soon achieved the deserved fame, that goes beyond the area of Bolgheri, reaching the neighbouring DOC areas of Montescudaio and Val di Cornia. This is how the Road of wine Coast of Etruscans was created, thanks to the wines, the enthusiastic young producers, but above all thanks to the territory, situated in a stripe parallel to the sea and adjoining it in some points. The “Coast of Etruscans” has all the features a visitor looks for: medieval villages in which life flows at a human rhythm, hills covered by woods in which it is possible to meet wild boars, fallow deer and roe deer, landscapes in which the green vegetation is combined with the intense blue of the sea, jovial and friendly people, natural and rich food that invites to taste the wines, fruit of these lands.

The Road of Wine will guide through cultural, environmental, and wine-and-food itineraries, with a perfect integration between the spiritual and the material world. From Guardistallo, Montescudaio and Casale, the three northernmost municipalities of the ancient estate belonging to the Della Gherardesca, it is possible to reach Montecatini Val di Cecina. The majority of wine cellars is found in the outskirts of the village, close to Castellina Marittima and to Montecatini.

In Bolgheri, beside the “viale dei cipressi” (avenue of cypresses), it is possibile to find the Sassicaia vineyards, and the cellars in which the Ornellaia and Le Macchiole are kept. Some crushers nearby the road can be an instructive stopover to learn about the cold working of the olive oil.